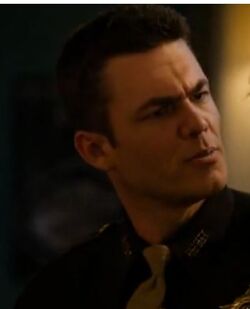 Nick Mooney is a recurring character in the FX series Justified. Mooney was the former Sheriff of Harlan, having previously worked as a deputy under sheriffs Tillman Napier and Shelby Parlow, as well as former Bennett Chief of Police Doyle Bennett. In "Shot All to Hell", Mooney is shot to death by Hayes Workman, who was paid off by Boyd Crowder with money meant for Mooney. Mooney is portrayed by guest star William Gregory Lee.

In "The Spoil", Nick is seen pulling over Boyd Crowder on the orders of his boss Doyle. He asks for Boyd's license and registration and while he gets it Boyd asks why they pulled him over and tell him it was for a broken taillight. His partner then smashes Boyd's left taillight and arrest him for not having a proper driver's license and they confiscate all his property, including a deed transferring ownership of Reggie Eames.

In "Full Commitment", Nick makes a brief appearance by Doyle's side as Raylan questions him about the hit on his and Winona's lives.

In "Bloody Harlan", Nick is betraying the Bennetts by offering to help Boyd with his war against them. When asked why, Nick states that he felt betrayed by the Bennetts when they took all their land and sold it to Black Pike and wanted revenge. Boyd observed that another reason he was doing this is so he could pave the way for him to become the next chief of police after Doyle was gone. Later on Boyd calls him and tells him to find Dickie. He then shows up at the Bennett's safehouse where Doyle tells the others about Loretta and when Mags tells Dickie to find Loretta. Nick soon tells Boyd where he can find Dickie soon afterwards.

In "The Man Behind The Curtain", Nick is one of the officers present when Napier promptly closes down Johnny Crowder's bar. Boyd Crowder questions him, wondering why he was not the next in line to become chief of police after Doyle's death. Nick tells him that Napier is his boss and he will do as he says and that he doesn't see anyone else paying any better. Boyd then offers to help Nick, but Nick says that he isn't fishing for a bribe, but Boyd tells him that if business goes slow, he knows where to find him.

In "Watching the Detectives", he arrests Boyd for allegedly setting a car bomb under Sheriff Napier's car. After they get back to the station they wait for the local media to show up and Nick tells Napier that they are there. He tries to get out but Napier stops him because the cameras are not on yet. After the cameras are on Nick perp walks Boyd while Napier grandstands for the campaign.

In "Guy Walks Into a Bar", he is caught along with Deputy Ethan Bishop by Shelby as they are attempting to plant drugs in Shelby's truck. Shelby forces the two men to leave at gunpoint, saying that he has been diagnosed with liver cancer and has no problem bringing two police officers down with him if he has to. Shelby also offers the men a position on his staff if he wins. Nick tells Shelby that he knows he is working for Boyd Crowder, and Bishop takes the drugs out of Shelby's truck as he goes to leave.

In "Foot Chase", Raylan Givens sees Nick at Josiah Cairn's house. Nick wonders what the Marshals would want with Josiah, and brings up his knowledge of Raylan visiting his home in the middle of the night. Raylan tells him that Josiah has information on a fugitive, and sarcastically tells him Jimmy Hoffa when Nick asks who.

In "Get Drew", Nick is seen with Raylan and Rachel Brooks as they stake out the airport where Shelby's plane awaits. Shelby has Ellen May drive past the airport when she notices a light on and he suspects a stakeout.

In "Peace of Mind", Nick arrives at the church and asks Raylan if he was involved in the shooting.

In "Ghosts", Nick and law enforcement find Delroy Baker's body in a mineshaft thanks to an anonymous tip (which later turns out to be Cassie St. Cyr). Nick accompanies Lee Paxton to Johnny's bar after he is called by Boyd. Lee owns the funeral home which houses Delroy's body. Lee suggests swapping Delroy's body with another corpse from the cemetary. Nick willingly helps Jimmy and Ava Crowder with the swap of Delroy's body with another corpse exhumed from the cemetery. That night, Nick and other officers arrest Ava as she attempts to dispose of the body. It turns out that Nick and Lee were part of an elaborate set-up to arrest Boyd for the murder of Delroy, although Ava is arrested instead. Boyd shows up and punches Nick two times before being subdued by the other officers at the scene.

In "The Kids Aren't All Right", Nick questions Mara in the hospital, asking if Boyd was responsible for the assault on Lee. Mara confirms that he was after Nick gives a physical description of him. However, Mara recants whenever Nick and his men take Mara to the bar to arrest Boyd. Later that night, Nick pulls her over on the side of the road, angered that she recanted and embarrassed him. Nick urges her at gunpoint to think long and hard and positively indentify Boyd next time.

In "Good Intentions", Nick visits Lee at the hospital with Mara, saying that she denied Boyd's responsibility in Lee's attack in front of all his men. Lee sides with Mara, saying that she was obviously terrified and tells Nick that he doesn't want Boyd arrested, but wants Nick to be the one to kill him. Nick gets a call from Mara, saying that Boyd has been around. When he gets there, he is set up by both Boyd and Mara. Boyd offers to give him the money he was originally going to give Lee if Nick tells Lee that he did as he asked and killed Boyd.

In "Over the Mountain", Nick brings the severed hand of a corpse to Lee (which is supposed to be Boyd's).

In "Shot All to Hell", Nick calls Lee in the middle of the night, telling him about an anonymous tip called in regarding bodies being stashed at one of Lee's funeral homes and that Lee had also made a deal with a local criminal element. Later, Nick meets Boyd in a diner and asks for his money since he did everything Boyd asked of him. Boyd tells Nick that he is going to the bathroom and he will give Nick what's coming to him. Shortly afterwards, Hayes Workman comes in the diner and shoots Nick to death.