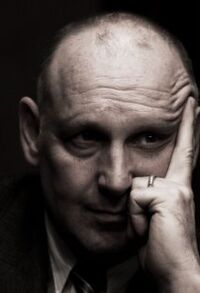 Born in Cullowhee, North Carolina, Searcy began acting in elementary school. Whenever the local university needed a kid to appear in a college play, they'd call on Searcy. Upon graduating high school, Searcy briefly attended the North Carolina School of the Arts and then went on to graduate from the University of North Carolina - Chapel Hill with a degree in English.

From 1982 to 1989, Searcy lived in New York where he did off-Broadway plays. Some of these included Guys and Dolls, Cabaret and Jesus Christ Superstar. When he moved back to North Carolina, he began to act in features that were shooting locally. Small parts in Days of Thunder (1990) and Prince of Tides led to the role of the malicious Frank in Fried Green Tomatoes (1991).

Searcy has appeared in several television series. He had a recurring role on Thunder Alley, was a series regular on American Gothic and guest starred on Murder One and Nash Bridges with Don Johnson. Also was in Seven Days . From 2004 to 2006 he was a regular character on the ABC-TV series Rodney, which starred Rodney Carrington. He has also starred in several TV movies, including In the Best of Families: Marriage, Pride & Madness (1994), Stolen Innocence (1995) and Le Jeu de l'oie (1980).

In the summer of 1996, Searcy produced, directed and acted in his first independent feature, Paradise Falls (1997), and won a Hollywood Discovery Award for Best Feature Film (Under $1 Million). Since then, he has been working his way up the Hollywood ladder with roles in films such as Cast Away (2000) starring Tom Hanks, One Hour Photo (2002) starring Robin Williams, Runaway Jury (2003) starring John Cusack and The Assassination of Richard Nixon (2005) starring Sean Penn.

Retrieved from "https://justified.fandom.com/wiki/Nick_Searcy?oldid=18251"
Community content is available under CC-BY-SA unless otherwise noted.