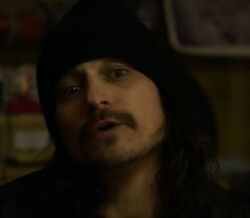 Nicky Cush is a recurring character in the fourth season of the FX series Justified. Nicky was the former owner of Audrey's, who sold it to Delroy when he decide to go into other business ventures. Nicky is portrayed by guest star Daniel Buran.

Cush formerly owned Audrey's, a local bar and brothel which is now closed down by the government. Cush had previously sold Audrey's to Delroy, when he decided to go into other business ventures.

In "Get Drew", Boyd Crowder, Colton Rhodes, and Jimmy visit him and interrogate him in hopes of learning Ellen May's whereabouts. Nicky says that she is at Ellstin Limehouse's holler as she used to threaten to go there all the time.

In "Peace of Mind", Ellen May comes to his hideout looking for a place to stay. Nicky gives her the keys so that she can go to Cassie St. Cyr's church to hide from Boyd and Ava Crowder. Later, Nick Augustine, Picker, and Boyd show up to his house. Nicky creates a diversion by leaving his shower on and jumps out at the three men wearing body armor. Although he gets Picker and Nick to drop their guns, Boyd shoots him in the foot and presses against the bullet wound. Nicky confesses that Ellen May has gone to the church.

Retrieved from "https://justified.fandom.com/wiki/Nicky_Cush?oldid=19870"
Community content is available under CC-BY-SA unless otherwise noted.