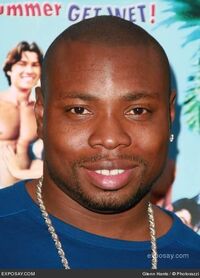 Page was born in Detroit and lived in Los Angeles with his mother until he was six-years old. He moved back to Detroit to live with his father, a doctor who died when Page was 16. Since his father's death, Page has been on his own but also made sure to fulfill his father's dreams of his only son going to college. He attended Grand Rapids Community College and then Western Michigan University. It was in Western Michigan University that Page was introduced to Shakespeare. With the influence of a mentor at school, Page grew to embrace Shakespeare. He enrolled in a graduate theater program at the University of Delaware to major in theatre and acting, which gave him an opportunity to concentrate on Shakespeare. He left the program after seven months and moved to Los Angeles.

Kennedy began his acting career with a role in the television feature The Kennedys in 2001. He next appeared in "Out, Out, Brief Candle", a second season episode of Six Feet Under, as Josh Langmead. He also appeared in Philly and landed a recurring role in the first season of FX crime drama The Shield. He played Lamar Tilton in the pilot and "Cupid & Psycho. In 2003 he appeared in the feature films S.W.A.T. (as Travis) and Leprechaun: Back 2 tha Hood. He also appeared in NYPD Blue that year. In 2004 he appeared in Medical Investigation and 10-8 Officers on Duty.

In 2005 he appeared in Blind Justice, Love, Inc., the feature In the Mix and the straight to video film Shackles. He also had recurring roles in the television series Barbershop as Big Trickey and the second season of Desperate Housewives as Caleb Applewhite. He was fired from the series and replaced in the role by NaShawn Kearse, reporting that the producers wanted to go in another direction. In 2006 he appeared in Pepper Dennis, CSI and Boston Legal. In 2007 he had a role in the straight to video film 4 Life as drug dealer Ty. He also had a recurring role in the third season of Weeds as a drug dealer named U-Turn. He appeared in episodes of CSI: Miami and My Name is Earl. In 2008 he appeared in the television feature The Life and Times of Marcus Felony Brown and had roles in Raising the Bar and Cold Case. In 2009 he had roles in the films See Dick Run, Dough Boys , A Day in the Life , The Janky Promoters and Dance Flick.

In 2010 he appeared in the television feature The Strip. He also had a role in the Justified first season episode "Fixer" as Curtis Mims, an aspiring gardener and loan collector. Also in 2010 he began a recurring role in Blue Mountain State as Radon Randell. In 2011 he appeared in The Closer.

Kennedy is a father of two children and resides in Los Angeles.