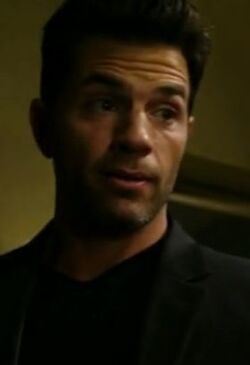 Name
Partlow
Birthplace
Detroit, Michigan
Birthdate
Age
Status
Alive
Cause of Death
Affiliation
Theo Tonin
Actor
Chris Tardio
Partlow is a supporting character in the FX series Justified third season episode "Measures". Partlow is a gun thug hired by Theo Tonin to go to Kentucky and kill Robert Quarles. The assassination attempt is foiled by Partlow and his accomplice Sarno being arrested by the US Marshals. Partlow is portrayed by guest star Chris Tardio.

Partlow is a gun thug from Detroit. He works for Detroit crime boss Theo Tonin. He is hired by Tonin to assassinate Robert Quarles. Quarles has a bounty on his head for threatening Sammy Tonin's life and took a large sum of cash. He is partnered with Sarno.

On arrival in Kentucky they speak to Wynn Duffy. Duffy tells them that he last saw Quarles at Lindsey Salazar's bar facing off against a US Marshal. He does not explain that the Marshal in question, Raylan Givens, lives above the bar.

In "Measures", he and Sarno arrive at Lindsey Salazar's bar looking for Robert Quarles. Raylan Givens immediately guesses that the two men are from Detroit, which amazes Sarno. Givens also believes that two men work for Sammy Tonin, but Sarno assures him that they do not; Givens then realizes that they work for Theo. Raylan calls the two men "knuckleheads", and Partlow warns him to watch his tone. Raylan insults Partlow, saying that he is only around so that Sammy doesn't look like the biggest asshole in the room. Partlow swings at Raylan, but Raylan counters and slams Partlow's head into the bar. Sarno prepares to fight Raylan but is halted by Lindsey entering the room. Raylan says that he was just telling them that the bar was closed and they were going to leave. Sarno mutters "Another time" to Raylan and the two men leave.

Partlow and Sarno return to Wynn Duffy's trailer. Duffy had sent the two men to Lindsey Salazar's bar in order to buy time for his next move; he was hoping they would either shoot Raylan or die themselves. Duffy suggests a deal; he will help them find Quarles if they continue to do business with him in the future.

Partlow, Sarno, Mike, and Duffy go to Quarles' hotel. Sarno stands guard while the others go inside. Partlow discovers Donovan gagged and chained to the toilet. Partlow removes the gag and asks why Quarles would come to Harlan. Donovan says that Quarles barely speaks to him, but asks Partlow to release him. Donovan headbutts Partlow when he comes near him and breaks free by wrenching the cistern away from the wall. Partlow is able to catch him and holds him hostage as Art Mullen and Raylan enter the hotel room.

Partlow threatens to shoot Donovan, but Art manages to save him by shooting Partlow in the leg. Raylan questions Partlow and learns that he had been sent to Kentucky to kill Quarles, rather than to work for Quarles as he originally assumed.

Retrieved from "https://justified.fandom.com/wiki/Partlow?oldid=21120"
Community content is available under CC-BY-SA unless otherwise noted.