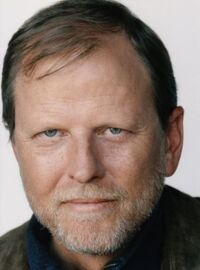 Pat Skipper - born William Patterson Skipper on 1958 in Lakeland, Florida - is an American actor who had a guest role as The Reverend in the FX series Justified first season episode, "Fathers and Sons".

Skipper was born on 1958 in Lakeland, Florida. He was educated at Florida State University and Yale University. Skipper is married to composer/arranger Jennifer Hammond. Their twins, Jack and Amelia, were born in 2002.

Pat is probably best known for his television work including parts in The X-Files and Boston Legal. In film, he played Carducci in the (1996) action/horror film Hellraiser IV: Bloodline, Mason Strode from Halloween, Seabiscuit's Vet from Seabiscuit (2003), Bob from Fits and Starts, and Agent Ellroy from Chain of Command.