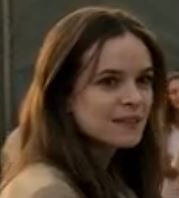 Penny Cole is a recurring character in the fifth season of the FX series Justified. Penny is a prisoner at the Kentucky State Women's Prison that Ava Crowder is transferred to. In "Starvation", she is stabbed to death with a shiv by Genny, a member of Gretchen Swift's crew. She is portrayed by guest star Danielle Panabaker.

Not much is known about Penny's background. Penny would help Judith smuggle heroin inside of the Kentucky State Women's Prison by having sex with prison guards while a plumber would smuggle heroin inside via his cleaning equipment. Penny reveals to Ava in "Weight", that she became pregnant and was forced to have abortions by Judith to keep their smuggling intact. It's because of this that Penny knew that Judith really doesn't care for her congregation as much as she proclaims and the reason she wanted Judith dead.

In "Kill the Messenger", Penny is seen associating with Ava, giving her some friendly advice in order to survive in the prison. Once Gretchen Swift shows up, Penny departs, telling Ava that she will see her later.

In "Raw Deal", Penny finds Ava hiding from Gretchen and lunch, telling her that she can set her up with Judith for protection, and is present at her meeting with Judith, who agrees to protect Ava if she helps smuggle heroin inside for her congregation. In the showers, Ava learns that part of the deal is having sex with a guard, as she sees Penny leaving to have sex with one of the guards during the drug transaction. After the plumber is arrested for being in possession of drugs, Ava says she may have another way to get heroin inside. Penny says that if Ava is being truthful about having a heroin source, she can supply a way to smuggle it.

In "Whistle Past the Graveyard", Penny helps Ava dislocate her shoulder so that she can go into the infirmary and talk to Rowena (a nurse who can help smuggle in heroin).

In "Weight", Penny comes into the bathroom while Ava is preparing to kill Judith, informing them both that the guards are doing bed checks. In the courtyard, Penny reveals that she knows Ava was trying to kill Judith and she wants her dead too, because Judith made her have abortions every time she would get pregnant from having sex with the guards for heroin smuggling. Penny tells Ava that Judith normally prays alone in the chapel at night, and that it is the perfect time to murder her because all the cameras are off. Penny slips Ava a shiv that is better for stabbing someone.

In "The Toll", she is seen with Ava in the bathroom, handing her a towel to clean herself up with after Judith's murder. At the lunch table, she and Ava notice the glances from Judith's congregation and Penny tells her that it's only a matter of time before they piece everything together and realize Ava killed Judith. As the members leave, Penny notices each one leaving their ice cream cups beside Ava, praising her for killing Judith.

In "Starvation", she is seen with Ava when Gretchen and her crew approach them, only to have the former members of Judith's congregation, stand in front of them, making them back off. In GenPop, she's seen listening to Nikki and Ava who were talking about Judith, and leaves to use the bathroom. Genny, a member of Gretchen's crew, drops a bloody shiv near their bunk and they go into the bathroom to find Penny, who was stabbed to death.