Edit
watch 01:36
We're Getting Mutants in the MCU - The Loop
Do you like this video?
Play Sound
Price 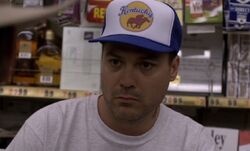 Price, played by guest star Myk Watford, is a character in the FX series Justified. Price is a convicted felon who escapes alongside Douglas Cooper. He is soon recaptured.

Price is a convicted felon incarcerated in Kentucky State Prison and the drummer in the prison band "The Big House Boys". He conspires to escape with fellow prisoner Douglas Cooper in exchange for a share of the take from Cooper's last bank robbery before he was imprisoned.

Cooper and Price escape while on work release to perform at a birthday party. Price knocks out one of the guards, Henry Sladinski, with a shovel and they take his shotgun and keys. They flee to a gas station and leave the lights on to attract a customer in order to steal their car. Deputy US Marshal Raylan Givens is the first to arrive. Cooper surprises and disarms him but then forces Price to flee on foot so that he will not have to share his money with him.

Price is tracked to a drainage culvert by dogs and recaptured. He is questioned by Rachel Brooks and reveals that Cooper is looking for his last score but claims not to know where it is hidden.