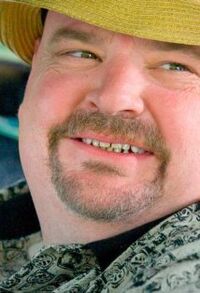 Vince was born in Baton Rouge, Louisiana. He attended Louisiana State University and began acting due to a mistake; a computer error in his high school registration scheduled him in an acting class, a subject which Vince has never left.

Vince made his film debut in Jim Jarmusch's Down by Law, but his scenes were cut. He had prominent supporting roles in a number of major films, including a turn as a dimwitted Ku Klux Klan member in Mississippi Burning, Lee Bowers in JFK, and the main character's best friend in Nobody's Fool. He also starred in Giuseppe Tornatore's The Legend of 1900 alongside Tim Roth. He had his first lead role in James Mangold's independent film Heavy, playing a sweet, silent overweight cook harboring a crush on a waitress (Liv Tyler).

Vince often alternates roles of both heroic and villainous characters, like a lovable small town pub owner in Beautiful Girls, a serial killer with multiple personalities in Identity (a second collaboration with director Mangold), the disheveled gossip columnist in s1mone, and a pompous sheriff in Nurse Betty. He can also be seen in Love from Ground Zero as Walter. Vince also played a Southern cop in Angel Heart, a kidnapper's assistant in Trapped, and a deputy prison warden in Oliver Stone's Natural Born Killers.

Vince received an Emmy Award in 1997 for Outstanding Guest Actor in a Drama Series for his role as serial killer Clifford Banks during the second season of the television series Murder One. He appeared in the movie Constantine. Other film titles include the neo-noir China Moon and the psychological horror film Jacob's Ladder. He shows great comedic talent as 'Jelly' in Flypaper.

Guest appearances on TV shows include Alias, The X-Files, Miami Vice, Quantum Leap, Chicago Hope, CSI: Crime Scene Investigation, Highlander: The Series, and the American remake of Touching Evil. He also had a guest role playing a 600-lb. patient in Fox's medical drama House. From 2005 to 2006 he guest starred in the HBO Western drama Deadwood as Mose Manuel. He appeared in ten episodes of Deadwood across the show's second and third seasons. In 2010/2011 Vince had a multi-episode appearance in The Mentalist. In fall 2011 he appeared as Otis in AMC's The Walking Dead. In 2012 he guest starred as Glen Fogel in the FX series Justified third season episode "Harlan Roulette".

Divorced from his first marriage, Vince remarried in 2003 to Julianne Mattelig. He has pathologic nystagmus, a condition which causes a person's eyes to move involuntarily.