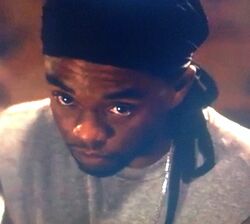 Ralph "Flex" Beeman was a guest character in the FX series Justified season two episode "For Blood or Money". Flex is an associate of Clinton Moss and an aspiring magician who later holds Clinton and Olander at gunpoint when Clinton shoots him in the hand after Flex refuses to give Clinton $100. He is killed by Rachel Brooks after the Marshals appear. He is portrayed by guest star Chadwick Boseman.

Retrieved from "https://justified.fandom.com/wiki/Ralph_%27Flex%27_Beeman?oldid=21339"
Community content is available under CC-BY-SA unless otherwise noted.