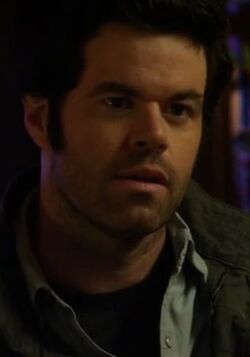 Randall Kusik is a recurring character in the fourth season of the FX series Justified. Randall is a burly man who is the ex-husband of Lindsey Salazar, the barmaid at the bar underneath Raylan's motel room. He is portrayed by guest star Robert Baker.

Randall is the ex-husband of Lindsey Salazar. While the two were together, they had a scam where Lindsey would get close to a man, find out what he had to steal, and then Randall would steal the merchandise. Randall, however, became too jealous of the attention Lindsey was getting, and almost beat a man to death. This caused him to be sent to prison, and split the two of them up.

In "Where's Waldo?", Randall comes into the bar while Raylan helps to sign for the beer deliveries at the bar. Despite Raylan's protest that the bar is closed, he helps himself to a beer anyway. After a brief standoff, the man leaves but throws a shoulder into Raylan in the process, and throws a stool onto the ground. Randall later fights in a bare-knuckle boxing match organized by Joe Hoppus, who pays him off after winning. Randall mentions some "other thing" before he leaves. Two patrons meet Randall on the way out, demanding him to pay them back out of the money they lost after betting for Randall's opponent that lost the match. Randall fights both of the men and then leaves. He comes back to the bar later that night, and reveals that Lindsey is his wife to a shocked Raylan.

In "Truth and Consequences", Raylan visits him at the gym. Raylan notes that the condition of Randall's parole from prison required him to stay in Florida. Raylan gives him until 6 PM to pack up his things and head back to Florida. Randall, however, challenges Raylan to a fight, which he cooly accepts. At 6 PM, Raylan goes back to the gym to learn that Randall has cleared out his locker, and has seemed to heed Raylan's warning. Later that night, Raylan finds his motel room trashed, and the cash he received from the Jody Adair side task missing.

In "This Bird Has Flown", Randall and Lindsey visit Joe, and hand him the money stolen from Raylan to help on the down payment for Randall's cock-fighting management. Joe makes the call for a persisent Randall. At a convenience store, Lindsey flirts with Alvin (The clerk), while Randall is busy stealing beers. Randall, however, gets jealous later and drives back to the store, pummeling Alvin. Lindsey attempts to alert Raylan, but hangs up when she sees Randall come back out. While the two are parked out by a farm, Raylan comes up armed with a shotgun full of bean bag rounds. He shoots Randall in the stomach, sending him to the ground. While Raylan talks with Lindsey, Randall tackles him to the ground and a scuffle ensues. Raylan gets the upper hand, but is shot by Lindsey. Randall is then shot three times before being knocked out by the butt of the shotgun. Raylan handcuffs Randall to the van and leaves him for the state troopers. Raylan shoots Randall one last time when Randall doesn't heed his warning about not mentioning chickens anymore.

Retrieved from "https://justified.fandom.com/wiki/Randall_Kusik?oldid=21098"
Community content is available under CC-BY-SA unless otherwise noted.