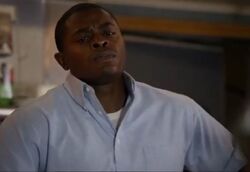 Reggie is a recurring character in the fifth and sixth season of the FX series Justified. Reggie is the employer and possible boyfriend of Abigail, managing a local diner. Reggie is portrayed by co-star Kareem Grimes.

In "Starvation", Reggie, a john, is seen in the back trailer when Dewey arrives to talk to Mina and Teena. Dewey gets into a scuffle with Reggie after seeing that he is wearing his alligator necklace he gave to the girls as a gift, retrieving the necklace and departing.

In "Fate's Right Hand", Reggie is shown to be the manager of a local diner where Mina, or Abigail as her real name is, is working. Reggie asks Mina if Dewey is giving her any trouble as the two talk at a booth.

Retrieved from "https://justified.fandom.com/wiki/Reggie?oldid=22079"
Community content is available under CC-BY-SA unless otherwise noted.