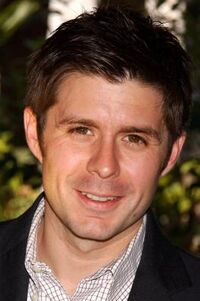 Gomez has been married to Jenifer Wymore since September 15th, 2001. Together, the couple has 2 children.

He also has a younger brother, Joshua Gomez, who has done some beer commercials and had a recurring spot for a series of IBM commercials. Joshua also has a recurring role on the TV series Chuck where he plays Chuck's best friend Morgan.

Gomez has a great ability to mimic other's voices, as shown in 'Band of Brothers'.

As an actor, Gomez is best known for his roles as T-4. George Luz in the HBO miniseries Band of Brothers. He worked with Justified show runner Graham Yost on Band of Brothers. He is also known as "Endless Mike" Hellstrom in the Nickelodeon TV series, The Adventures of Pete and Pete. Gomez also appeared as Klump in Sin City, a sheriff in Transformers, Tom Dowd in Ray, and Kevin in 11:14.

In 1998, Gomez was nominated for an ALMA Award for Outstanding Actor in a Comedy Series for the 1997 short-lived TV Series, Hitz.

Retrieved from "https://justified.fandom.com/wiki/Rick_Gomez?oldid=18255"
Community content is available under CC-BY-SA unless otherwise noted.