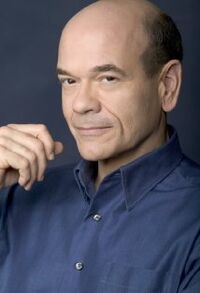 Robert Picardo - born October 27, 1953 (1953-10-27) (age 67) in Philadelphia, Pennsylvania, USA - is an American actor who guest stars as Karl Hanselman in the FX series Justified first season episode "The Collection". He starred as Starfleet's Emergency Medical Hologram, The Doctor on Star Trek: Voyager. He has been acting on screen since 1975 and has appeared in over 150 projects.

Retrieved from "https://justified.fandom.com/wiki/Robert_Picardo?oldid=10607"
Community content is available under CC-BY-SA unless otherwise noted.