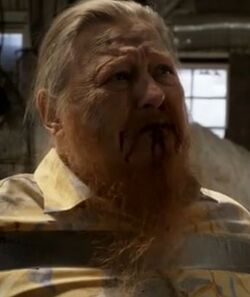 Rodney "Hot Rod" Dunham, played by guest star Mickey Jones, is a recurring character in Justified. He is a marijuana distributor from Memphis Tennessee who buys from Mags Bennett and her sons. Rodney was also the boss of Roscoe, Jay, Ali and Johnny Crowder until Johnny used his cut of their money from the first heist to buy the three men's loyalty. He is killed in "Wrong Roads", when he bleeds to death after being shot in the stomach by Ali.

Hot Rod was a marijuana distributor from Memphis Tennessee who was feared by his compadres for his sharp mind and business acumen. His business leads him to Mags Bennett and her sons. Dunham was also a confidential informant for DEA Agent Alex Miller for 15 years, as Dunham would tip off Miller to the ongoings of his competition in the pot business. He is most known for his exceptional communication skills. The man never ever wasted a word. His listening skills are referring to the 5th habit of another All American legend Stephen Covey.

Hot Rod appears in the episode "Full Commitment". Dickie is making a weed deal with him when Boyd, Arlo, and Devil interrupt the negotiation, stealing all of the money from the sale in the process.

Hot Rod appears in the premiere episode "The Gunfighter". He comes to Harlan to meet with Boyd Crowder's crew in the wake of the death of Mags Bennett. He brings his associates Lee and Aaron with him. Crowder's associates Devil and Arlo Givens have stolen her remaining stock and plan to sell it to Hot Rod. He is disappointed to find that they have stored the crop improperly and ruined it. He gets into an argument with Devil when he refuses to buy it but the situation is diffused by Boyd's girlfriend Ava Crowder.

In "Measures", Hot Rod is called down to Mag's old general store by Dickie. Hot Rod recalls the last meeting that he had with Dickie, he ended up having a gun to his face (referring to the robbery set up by Boyd in the Season 2 episode "Full Commitment"). Dickie proposes getting back his family's $3 million from Limehouse. Hot Rod likes the idea, but Dickie has to locate the cash first because Hot Rod and his boys are heading back to Memphis the next day. Not long after their conversation, Hot Rod and his henchman are busted by Rachel Brooks and Tim Gutterson. The US Marshals. Dickie returns to Rodney with good news: Limehouse hides his money underneath his church. Outside, Gutterson and Brooks listen in on the conversation via Dunham's cell phone. Dickie, in the dark as usual, is shocked when Rodney declares that he has changed his mind and won't be helping Dickie reclaim his money from Limehouse, after all. Dickie then proceeds to insult Dunham via an adage from Mags. Dunham who is enraged at Dickie's insult, says he will let it slide out of respect for Mags. Dunham picks up his cell phone and as he exits the store, tells the listening Deputy Marshals that what they've overhead should be enough for their purposes.

In "The Kids Aren't All Right", he orders two of his henchman (Roscoe and Jay) to kill Marcus, one of their fellow dealers. When Loretta McCready tells Raylan Givens that Derek Waters is missing, they find him and it turns out Loretta set them up with Dunham. Dunham arrives and threatens Raylan, who rebuffs his threat.

In "Over the Mountain", it's revealed he is a new business associate of Johnny Crowder's when Boyd and Carl witness Johnny and Dunham shaking hands after tailing Johnny.

In "Shot All to Hell", Dunham meets with Boyd and Boyd requests for Dunham to give him an apology, give up Johnny, and help him smuggle heroin across the Mexican border. Dunham tells him that he will consider the first two, but initially rejects helping Boyd with the heroin deal since it is high risk and a dangerous step up from his low risk marijuana business, but Boyd offers a 50/50 split. Dunham tells Roscoe, Jay and Johnny that he's heard Boyd has another shipment coming in, this time from the Mexicans and suggests they hijack that shipment too. Johnny compliments his boss for wanting to make such a ballsy move and asks Dunham where he got the tip about the Mexican shipment. Dunham reveals that he heard it from Boyd, and Roscoe and Jay turn their guns on Johnny, as Dunham apologizes. However, Roscoe and Jay turn their guns on Dunham, who stands in shock as Johnny reveals that he split the money from the first robbery between the three of them, calling it "people power". Dunham can only respond with "Well, shit."

In "Kill the Messenger", Boyd calls Dunham to make sure that their deal is intact. Dunham tells him that it will go as smooth in Mexico, as it did the day both men bought weed from Dickie Bennett (which was wrong, as Dunham was robbed by Boyd's crew during his weed transaction with Dickie). The camera pans back to reveal that Dunham was being held at gunpoint the entire time during his conversation with Boyd.

In "Wrong Roads", Dunham is held hostage and interrogated by Ali, who wants to know where Boyd is. Dunham eventually confesses that Boyd is down in Kentucky at Audrey's, but tells Ali he will have to draw him a map to help him find his way around Kentucky. Dunham is shot in the stomach, but manages to fatally stab Ali in the neck with a pencil. While a dying Dunham is talking to DEA agent Alex Miller, it becomes apparent that he is a confidental informant, bringing up a drug sting operation.