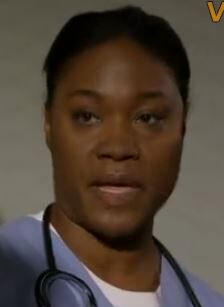 Rowena is a recurring character in the fifth season of the FX series Justified. Rowena is a nurse who agrees to help Ava Crowder smuggle heroin inside of the prison. She is portrayed by guest star Deidrie Henry.

In "Whistle Past the Graveyard", Ava has Penny Cole intentionally dislocate her shoulder so that she can get into the infirmary and talk to Rowena. Ava makes suggestive comments about more powerful painkillers, but the nurse quickly shoots the comments down. Ava is visited by Rowena while in the shower, and Rowena scolds her about mentioning the drugs while other patients were in the infirmary. Rowena offers to help Ava smuggle on two conditions: That Judith not find out she is the drug source and that Boyd has to do something for her on the outside, but she does't reveal what.

In "Wrong Roads", Rowena meets with Boyd Crowder, requesting for his help to avenge the death of her drug smuggling partner Vernon, who was killed by Elmont Swain when his wife, Elena, overdosed on the drugs being smuggled in the prison. Later in the episode, Ava meets with her in the infirmary, where it turns out she has another favor, but this time for Ava, wanting her to kill Judith.

In "Restitution", Rowena helps pop Ava's shoulder back into place after her fight with members of Gretchen Swift's crew. Rowena tells Ava that believing alive is good for their business and that she has two choices: Spend the next 5 years in solitary or be prepared to fight.

Retrieved from "https://justified.fandom.com/wiki/Rowena?oldid=22060"
Community content is available under CC-BY-SA unless otherwise noted.