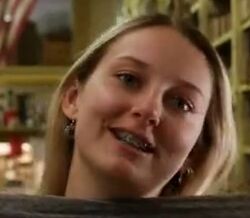 Roz is a recurring character in the fourth season of the FX series Justified. Roz is a teenager hired by her step-father Josiah Cairn (along with Benny) to retrieve a mysterious canvas bag from the inside of a wall in Arlo Givens' house. Roz is portrayed by guest star Alexandra Kyle.

Not much is known about Roz, other than the fact that she and Benny "claim" to have killed twelve men the day before the events of Hole in the Wall took place.

In "Hole in the Wall", Roz and Benny break into Arlo's home and begin to bash holes into a dry wall. It appears that the two are just looking for copper wire to sell for a profit. The two flee the house when they see Constable Bob Sweeney pulling up outside. From a distance, they watch as Raylan Givens throws a canvas bag into a trunk, and they follow him to a hardware store. While he is inside, Roz attempts to flirt with Raylan (even flashing him) long enough for Benny to steal Raylan's car. Roz also flashes shopkeeper Mike Jackson on her way out. Raylan follows them to a scrap yard, where he finds Jody Adair, Roz, and Benny inside. Roz holds Raylan at gunpoint, and Jody pleads for her to shoot him. Raylan promises that Roz and Benny can skate on the car theft charges if she hands him the gun. Raylan punches the scrap yard operator, Henry, in the face when he comes inside with a battered Sweeney. The distraction is long enough for Jody to grab the gun and hold Roz hostage. Sweeney pulls out his knife and stabs Roz in the foot, causing another distraction that allows Raylan to subdue Jody with a rim. Raylan sees that the teenagers were only after the bag.

In "Kin", she attempted to escape capture from Bob Sweeney, but was easily caught because of her hurt foot. She tells Raylan that her step-father, Josiah Cairn, gave her and Benny the order to retrieve the diplomatic bag from the dry wall in Arlo's house. She also says that her father will kick her ass if he finds out she had talked to law enforcement.

In "Foot Chase", Raylan notices her bloody footprint at the Cairn household. Shelby Parlow and Raylan visit her at Teddy's house. Roz denies any involvement with severing her step-father's foot, and Raylan threatens to expose her sexual relationship with the much older Teddy, that would get him arrest for statutory rape. Roz tells him that Josiah ordered her to hide when the two men came up, and that she heard the men call him "Drew Thompson" before his scream. Roz planned on her and Teddy killing the two men as revenge.

Retrieved from "https://justified.fandom.com/wiki/Roz?oldid=21768"
Community content is available under CC-BY-SA unless otherwise noted.