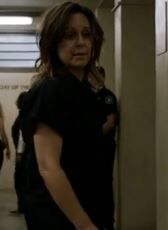 Sally is a recurring character in the fifth season of the FX series Justified. She is also arrested at the same county jail where Ava Crowder is incarcerated. She is portrayed by co-star Laura Niemi.

In "Over the Mountain", she visits Ava's cell and asks her if she is coming to lunch.

In "Shot All to Hell", Albert Fekus enters into Ava and Sally's cell, doing a bed search where he finds a shiv under one of the mattresses. Sally plays along with Albert after he stabs and cuts himself with the shiv, yelling to the guards that Ava shanked Albert.

Retrieved from "https://justified.fandom.com/wiki/Sally?oldid=17843"
Community content is available under CC-BY-SA unless otherwise noted.