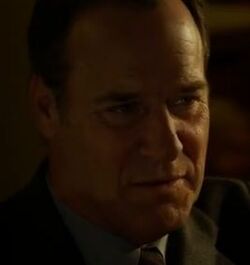 Sam Keener was a recurring character in the fourth season of the FX series Justified. Sam was introduced as an attendant of  Tillman Napier's swinger party and a member of the Clover Hillers. In "Outlaw", he is shot and killed by the Tonin Hitman, after his boss Theo Tonin confirms that Sam is not Drew Thompson. He is portrayed by guest star Grainger Hines.

Not much was known about Sam's background except that he and Johnny Crowder's uncle Owen used to share drinks together.

In "Money Trap", Ava socializes with Sam to see if he is Drew Thompson. Sam also remembers Ava from her childhood, and he continues flirting with her until she has to leave. Later, he is seen trying to stop another attendant that tries to rape Ava. He is later revealed to be a Clover Hiller as he is seen with Arnold, Gerald Johns and Lee Paxton when they plot their assassination attempt against Frank Browning.

In "Outlaw", Sam is seen with a mistress when the Tonin Hitman comes to the door, disguised as a Harlan County Deputy. The hitman takes a photo of Sam, which Theo Tonin confirms that it isn't Drew Thompson. The hitman then shoots and kills Sam.

Retrieved from "https://justified.fandom.com/wiki/Sam_Keener?oldid=19546"
Community content is available under CC-BY-SA unless otherwise noted.