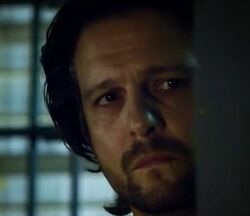 Sam Porter is a guest character in the FX series Justified fourth season episode "Hole in the Wall". Sam was an observant inmate who delivered books to other prisoners and was a trustee. He is portrayed by co-star Christopher Weir.

Sam was a formerly a thug for the Dixie Mafia before he was incarcerated. He served eight years of a ten year stint for attempted murder.

In "Hole in the Wall", he observes Raylan Givens leaving the prison with a mysterious canvas bag. Sam visits Arlo Givens in his cell and mentions that he noticed a similar bag to it, although Arlo plays the whole thing off. When Sam has his back turned to give Arlo a book, Arlo slits Sam's throat with a razor blade.

Retrieved from "https://justified.fandom.com/wiki/Sam_Porter?oldid=21132"
Community content is available under CC-BY-SA unless otherwise noted.