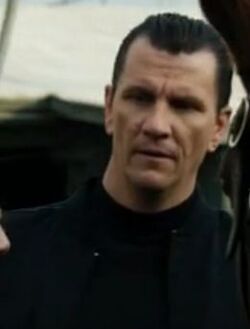 Name
Sammy's Goon
Birthplace
Detroit, Michigan
Birthdate
Age
Status
Alive
Cause of Death
Affiliation
Sammy Tonin
Actor
David Atkinson
Sammy's Goon is an unnamed supporting character in the FX series Justified Season 3 episodes "The Man Behind The Curtain" and "Watching the Detectives". He is a henchman of Sammy Tonin, and is present with him at the race track when he is checking out horses. Sammy asks if he should get two horses, but he warns Sammy that it's twice the horse feces but says it is his call. Sammy is also present whenever Robert Quarles runs into Sammy before Quarles leaves for Tulsa. Sammy's Goon is portrayed by co-star David Atkinson.

Retrieved from "https://justified.fandom.com/wiki/Sammy%27s_Goon?oldid=17555"
Community content is available under CC-BY-SA unless otherwise noted.