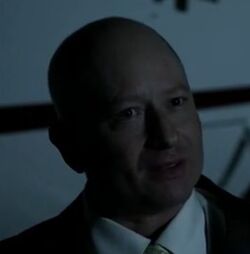 Samuel "Sammy" Tonin is a recurring character in the FX series Justified. Sammy is the son of Detroit crime boss Theo Tonin, as well as the adoptive brother of Robert Quarles. He comes down to Harlan to check out Quarles's business ventures, as well as to check out some horses. He soon becomes the head of the Detroit mafia when Theo flees to Tunisia. In "A Murder of Crowes", he is shot in the head by Ethan Picker as part of a deal that Picker had struck with the Canadians. Tonin is portrayed by guest star Max Perlich.

Tonin is the son of mob boss Theo Tonin, and the adoptive brother of Robert Quarles. Quarles despised Tonin due to his cowardice, and even more so when Theo left all of his inheritance to Sammy.

In "The Man Behind The Curtain", he comes down to Harlan to check out Quarles's business ventures. Sammy suggests that Quarles is wasting his time dealing with a bunch of hillbillies but Quarles tells him that once the Oxy market is secured, it will bring in $1 million each month. Sammy tells him that he is on his second and last chance with Theo after the incident with the "rent boy" and asks Quarles if he has told the story to Wynn Duffy, but Quarles changes the subject and says that Duffy isn't interested in hearing about it. Raylan Givens wants to talk to Sammy, but he is under FBI surveillance and due to Raylan's reputation, he is ordered by Agent Barkley to not go anywhere near him. However, Raylan locates Sammy at a horse race track, and pays off a Stable Hand, who tells Sammy to go speak with the manager in the main barn about a problem with a recently brought horse. Sammy asks Raylan to kill him quickly and to tell Quarles he didn't beg, believing that Raylan is working for him. An angered Raylan says that Sammy is the second asshole that has accused him of being dirty. However, Raylan correctly guesses that Sammy wants the same thing as he does: To put a stop to Quarles. Later, Quarles is angry that the wire transfer of $50 grand was canceled by Sammy, to which Sammy explains that Quarles hasn't adequately taken care of law enforcement. Quarles informs him that he is going to Tulsa to meet with a pal of Raylan's. He then urges Sammy to mention that Givens is "in bed" with Boyd Crowder the next time the mobster is sure the FBI is listening. Sammy, who is intimidated by Quarles, agrees to do so.

In "Watching the Detectives" Sammy and his goon are eating at a fancy restaurant when he gets a phone call. Knowing that the FBI is listening, he does what Quarles told him to do and tells the "caller" that Raylan is in the pocket of Boyd Crowder. Later, Sammy tells Quarles that Theo's guy in the bureau says that Raylan has managed to dodge the framing and that they cannot have anymore heat on them since they are already being heavily watched by the feds. Sammy tells Quarles that "It's over, you're out". Quarles, in anger, slings his arm forward causing his pistol on his arm holster to go into his hand, and he points it at Sammy. Sammy informs him that it will be a short and lonely life if he goes through with killing him. Quarles pulls the gun back in and tells him to get out of here. Sammy simply says "That's awesome, does it ever jam on you?" before he and his goon leave.

In "Ghosts", Sammy comes down to Harlan after being called by Raylan and thanks him for reaching out. After learning that Nick Augustine wants him dead, Sammy has his men (along with Picker) shoot up Augustine's limo, killing him. With his dad's departure to Tunisia, Sammy is the new head of the Detroit mob and he makes Wynn Duffy his man east of the Mississippi.

By the time the events of Season 5 take place, Sammy has run his father's empire into the ground, and the Detroit Mafia is collapsing. Sammy is in serious debt to Canadian criminals and is in hiding in an abandoned apartment building.

In " A Murder of Crowes", After meeting up with Boyd Crowder & Wynn Duffy in Detroit, Michigan at an abandoned apartment, he is shot through the back of the head by Picker as Boyd & Duffy look on in shock. Picker tells Boyd that Sammy owed $1,000,000 to the Canadians and that Picker made a deal with them to kill Sammy and give them their money, and in exchange, they wouldn't kill him.

Retrieved from "https://justified.fandom.com/wiki/Sammy_Tonin?oldid=21114"
Community content is available under CC-BY-SA unless otherwise noted.