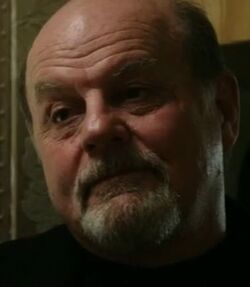 Name
Sarno
Birthplace
Detroit, Michigan
Birthdate
Age
Status
Alive
Cause of Death
Affiliation
Theo Tonin
Actor
Michael Ironside
Sarno is a supporting character in the FX series Justified third season episode "Measures". Sarno is a gun thug hired by Theo Tonin to go to Kentucky to kill Robert Quarles. The assassination attempt is foiled when Sarno and his accomplice Partlow are arrested by the US Marshals. Sarno is portrayed by guest star Michael Ironside.

Sarno is a gun thug from Detroit where he works for Detroit crime boss Theo Tonin. He is hired by Tonin to assassinate Robert Quarles, who now has a bounty on his head after Quarles threatened Sammy Tonin's life and took a great sum of cash from Tonin.

In "Measures", he and Partlow arrive at Lindsey Salazar's bar looking for Robert Quarles. Raylan Givens immediately guesses that the two men are from Detroit, which amazes Sarno. Givens assumes that the two men work for Sammy Tonin, but Sarno disabuses him of that notion. Givens realizes that they work for Theo. Raylan calls the two men "knuckleheads", and Partlow warns him to watch his tone. Raylan insults Partlow, saying that he is only around so that Sammy doesn't look like the biggest asshole in the room. Sarno prepares to fight Raylan after Raylan slams Partlow's head into the bar. Lindsey enters, breaking them up. Raylan says that he was just telling them that the bar was closed and that they were going to leave. Sarno mutters "Another time" on his way out.

Partlow and Sarno return to Wynn Duffy at his RV. Duffy had sent the two men to Lindsey Salazar's bar in order to buy time for his next move; he was hoping they would either shoot Raylan or be killed. Duffy suggests a deal; he will help them find Quarles if they let him take over the Kentucky operation. Sarno keeps watch as Mike, Duffy, and Partlow go to Quarles's hotel room to look for him. He is distracted by Art Mullen walking down the sidewalk allowing Raylan to sneak up and arrest him. Sarno says in the old days he would have never been snuck up on like that. Raylan asks him if it is because of his age or if he just was never that good to begin with. Sarno asks the marshals not to intervene and let nature take its course but they proceed with arresting both him and Partlow.

Retrieved from "https://justified.fandom.com/wiki/Sarno?oldid=21121"
Community content is available under CC-BY-SA unless otherwise noted.