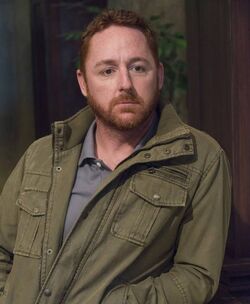 Seabass (real name Sean) was a recurring character who appears in the sixth season of the FX series Justified. He is portrayed by guest star Scott Grimes.

Seabass is an accomplice of Ty Walker and the dim-witted Choo-Choo. He is an ex-Ranger, former special ops and employee of Tiger Hawk Security.

In "Cash Game", he is seen at the pizza parlor when Tim Gutterson and Choo-Choo show up where he orders Tim to leave after a conversation. Later that night, he and Walker are seen at the house of the couple who earlier had refused to sell their property.

In "Noblesse Oblige", he and Choo-Choo abduct Boyd Crowder from Johnny's bar and threatens that there won't be a third warning and forces Boyd to say he understands. Seabass then threatens Ava on his way out, although saying Boyd was smart to send in the attractive Ava to do recon.

In "Sounding", he and Choo-Choo interrogate Calhoun Schrier in order to find out who he gave information to after it is revealed that someone has been interfering in their plans to buy up properties in Kentucky. However, the interrogation goes wrong when Choo-Choo accidentally kills Calhoun when he punches him in the head.

In "Alive Day", he is present along with Walker and Choo-Choo as they discuss what to do with Calhoun's body and agrees to look for Caprice (Calhoun's prostitute who saw his and Choo-Choo's faces the night they visited Calhoun) until Choo-Choo agrees to it, wanting to clean up his own mess. Seabass is later present at The Portal when Raylan and Tim arrive investigating Calhoun's murder and Choo-Choo's disappearance.

In "The Hunt", Walker calls Markham and Seabass wanting an extraction as he was shot in the shoulder by Raylan during the shootout, lying and telling the two men to pick him up at a church in Corbin where he is held up. Seabass offers to go look for Walker, but Markham warns him that Walker is lying about his whereabouts and is going to make Seabass walk into a trap. Markham warns Seabass that Walker is burned and to not step in that fire, offering cash for Seabass' loyalty and promising that the only orders he will ever listen to again are his own. Seabass accepts the cash and walks away.

In "Burned", Seabass shows up and holds Markham and Katherine Hale at gunpoint in their hotel room, demanding a "severance pay". Katherine offers to give Seabass the tennis bracelet that she had previously stolen from her purse, but instead shoots Seabass with a small handgun she has hidden inside of it. Katherine then shoots Seabass in the head to finish him off.