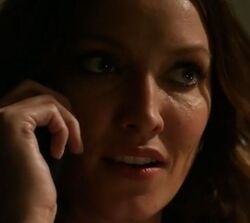 Sharon Edmunds is a recurring character in the fourth season of the FX series Justified. She was a bailbondswoman and former lover of Raylan Givens. She hires Raylan off-the-books to capture Jody Adair, a criminal who murdered two heroin dealers and jumped bail, relocating back to Kentucky. Once Sharon has Jody in custody he escapes and kills her. She is portrayed by co-star Aja Evans.

Not much is known about Sharon's background.

In "Hole in the Wall", she calls Raylan and hires him for an off-the-books to capture Jody Adair, a bail jumper who murdered two heroin dealers and located back to Kentucky, presumably to find his ex-wife. Sharon offers him reward money if Jody is captured by Kentucky lawmen.

In "Money Trap", she is seen in a flashback from six days ago, paying off Raylan for the capture of Jody. The van Jody is being held in is forced to pull over on the side of the road because of a flat tire. Jody escapes from the van when Mitch opens it to fix the tire. Jody strangles him to death and then sneaks up on Sharon, who is using the bathroom in the woods. Sharon draws on him, shooting him in the shoulder, while he fatally shoots her in the side of the neck.

Retrieved from "https://justified.fandom.com/wiki/Sharon_Edmunds?oldid=17882"
Community content is available under CC-BY-SA unless otherwise noted.