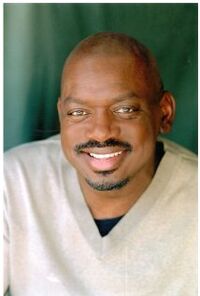 Shashawnee Hall - born Shashawnee E. Hall on December 27, 1961 (1961-12-27) (age 58) in Savannah, Georgia, USA - is an actor. He has a recurring role as Ed Kirkland in the fifth season. He has appeared in films such as A Nightmare on Elm Street, Bruce Almighty, and Evan Almighty. He has appeared in TV series such as Castle, Switched at Birth, Life, Shark, Medium, and Without a Trace.

Retrieved from "https://justified.fandom.com/wiki/Shashawnee_Hall?oldid=16473"
Community content is available under CC-BY-SA unless otherwise noted.