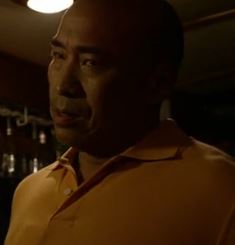 Simon Lee is a guest character in the FX series Justified fifth season episode, "A Murder of Crowes". He is a rogue Coast Guard who helped out the Crowe family in their smuggling of contraband sugar. He is portrayed by guest star Ron Yuan.

In "A Murder of Crowes", Dilly Crowe and Elvis Machado visit Simon Lee, a rogue Coast Guard pay him for his part in their criminal enterprise, the smuggling of contraband sugar to sell below market value to candy companies. Simon is displeased with dealing with Dilly, and would much rather deal with the other brother, but Dilly tells Simon he can't do that. Dilly shoots Simon after he continuously makes fun of Dilly's stuttering, and is further finished off by Machado. Lee's disappearances places Machado under federal investigation.

Retrieved from "https://justified.fandom.com/wiki/Simon_Lee?oldid=17821"
Community content is available under CC-BY-SA unless otherwise noted.