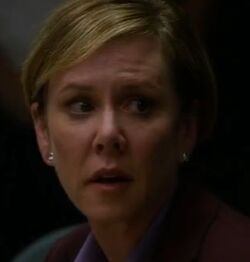 Sonya Gable is a recurring character in the fourth season of the FX series Justified. Sonya is an attorney representing Arlo Givens. Sonya is portrayed by guest star Romy Rosemont.

Not much is known about Sonya's background.

In "Kin", Sonya represents Arlo when he comes into the Marshals office for the Drew Thompson deal. She is paid off by Boyd Crowder to break attorney-client priviledge.

In "Foot Chase", Sonya visits Boyd at Shelby Parlow's office, demanding his release if there is nothing to charge him with. Raylan recognizes her as Arlo's attorney, and questions why she seems to be stalling the deal. Sonya denies any involvement of this before leaving. At her residence, she chastises John and Grady for yelling, and also objects to the idea of cauterizing Josiah's wound with a blowtorch. When Raylan and Shelby intervene with their guns, Sonya is arrested.

Retrieved from "https://justified.fandom.com/wiki/Sonya_Gable?oldid=22025"
Community content is available under CC-BY-SA unless otherwise noted.