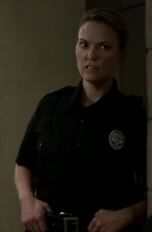 Susan Crane is a recurring character in the fifth season of the FX series Justified. She is an officer at the county jail where Ava Crowder is incarcerated. She is portrayed by co-star Arriane Alexander.

In "A Murder of Crowes", she appears when Boyd and Ava are talking and announces that visitation time is over.

In "Over the Mountain", She is present in the room when Boyd and Ava meet with Johnny Crowder. Later, she walks up on Albert Fekus attempting to rape Ava in her cell. Albert claims that Ava was resisting and she claims she tripped and grabbed his arm. Outside, Albert admits what he was really doing with Ava but Susan brutally beats him for making the mistake of going after a protected inmate and theatens to put out his cigarette on his eyeball.

Retrieved from "https://justified.fandom.com/wiki/Susan_Crane?oldid=21649"
Community content is available under CC-BY-SA unless otherwise noted.