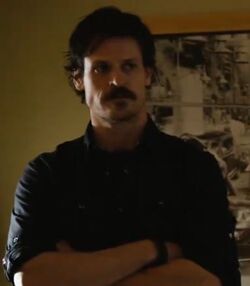 Tanner Dodd is a recurring character in the third season of the FX series Justified. Dodd is an associate of Robert Quarles, who acts as a scout for Quarles, helping him to recruit criminals who are underutilized in their current group. Dodd appears in the beginning of the "The Devil You Know", helping to recruit Devil, who after much persuasion, agrees to join Quarles's side. Dodd ends up being assaulted by Johnny Crowder in "Thick as Mud", after Boyd pays him a visit in a bar. Dodd is killed in "Loose Ends" when he sets off a land mine he is standing on top of by accident when his gun slips out of his hand. Dodd was portrayed by co-star Brendan McCarthy.

Dodd is an associate of Robert Quarles, who acts as a scout to help recruit underutilized criminals to work for Quarles. It does appear that Devil and Dodd do have some sort of past history, during Quarles's meeting with Devil.

In "The Devil You Know", Dodd is seen talking to Devil on the porch of Quarles's office. Dodd tells an impatient Devil that Quarles (who he refers to as "The Wizard") will meet with Devil whenever he is good and ready. Not long after, Quarles soon shows up, and informs Devil that Dodd is somewhat of a "talent scout", who looks for underutilized criminals to help their cause, and feels that Devil is the right man for the job. Quarles then forces Dodd to give him an Amen during his tirade towards Devil when Devil admits that Boyd Crowder has things lined up.

In "Thick as Mud", Boyd, Rip, Jimmy, and Johnny Crowder enter a bar where Dodd is sitting with his girlfriend Trixie. Jimmy unplugs the jukebox, and Boyd dials the last number called from Devil's cell phone. Suddenly, Dodd's phone begins to vibrate, and Boyd pulls up a chair. Boyd explains that they HAD a friend in common, and tells him to relay the information about Boyd killing Devil to Quarles, as well as another message. Dodd ends up being assaulted by Johnny when he asks "What's the message?" in reply.

In "When the Guns Come Out", Tanner and Teddy show up at the clinic Boyd set up for Doc Stern. They shoot and kill Rip who was keeping guard in the living room before making their way into Stern's office. Dodd shoots Stern and Trixie both in the stomach (The two fail to notice Ellen May in the room due to her hiding under a desk).Dodd orders Teddy to take the Oxy before shooting Trixie and Stern a final time. Raylan Givens soons drives up to his clinic, and Dodd orders everyone to leave but orders another henchman to drive off if he sees Raylan enter. Raylan asks him if he knows anything about the Oxy clinic on Indian Line. Dodd says he doesn't know anything, but Raylan says he fits the description of a shooter that killed three people by an eye witness. Dodd attempts to shoot Raylan, but Raylan manages to grab his arm causing him to shoot at the ceiling of the clinc. Raylan gets the upper hand in the fist fight, but Dodd kicks him into a table and attempts to retrieve his gun. Raylan once again grabs his arm and he fires two shots into the front of the cab, one of which hits the driver. Gus, in the back of the throat, killing him. Raylan then throws Dodd out of the front of the clinic, which is gradually slowing down due to the dead driver. Dodd limps over to grab his handgun.

In "The Man Behind The Curtain", Tanner shows up to Limehouse's holler, escorted by Bernard. Dodd tells Errol that he's sorry for not contacting him earlier over the phone. Dodd also says that he did his job (Shooting up Boyd's Oxy clinic in the last episode). Dodd says if Quarles finds out he shot up the Oxy clinic, he is a dead man and that the law is looking for him, and that the holler is the only safe place he can hideout. He persuades a reluctant Errol to let him stay, but he ends up behind held down by Bernard and threatened with a power spray nozzle that Errol had used to wash pig carcasses with. Limehouse orders the two men to let him go. Limehouse orders him to go back to Quarles and take the rap for the Oxy massacre, as well as to say he did it to get back at the Crowders because he thought that Quarles would approve. Dodd agrees to help, and Limehouse also asks Dodd to become his informant so that he can know what Quarles is up to, which Dodd also agrees to do.

In "Watching the Detectives", Dodd tells Quarles that he organized the hit on Boyd's Oxy clinic to get revenge and thought he would approve of it (As what Limehouse told him to do last episode). Tanner apologizes profusely for attracting attention from the law, and then promises to do whatever he can to make it up to Quarles. He, along with Tillman Napier, organize a supposed assassination attempt involving Napier's police car being exploded by dynamite in order to frame Boyd, who is supporting Napier's opponent Shelby in the upcoming election. Later, Tanner appears at the Sheriff's office. Tanner explains that he is there to collect payment. Napier refuses, telling Tanner that he wasn't supposed to set off the car bomb until the Sheriff was safely back inside his house.

In "Loose Ends" Dodd and Errol go over to Lemuel Becket's place in order to get Dodd's money back since Dodd had bought the explosives from him. Both men hold him at gunpoint and force him inside. Dodd then stands on what appears to be a step-ladder in order to retrieve the money but it turns out to be a land mine. Becket informs him that one large change in weight will result in the bomb going off, but if they kill Becket (the only one that knows how to disarm it). Dodd agrees to slowly drop his weapon, but Errol shoots and kills Becket because he needs to tie all the loose ends that go back to Limehouse. Soon Raylan, Tom Bergen, and ATF Agent Keaton show up in order to defuse the bomb. Raylan soon cuts a deal with Dodd in order to get information about Napier and Quarles, Dodd doesn't want to reveal any information until he is off the land mine, which could take up to hours to defuse. Dodd accidently drops his pistol due to his hands sweating, which causes the land mine to activate, killing him.

Retrieved from "https://justified.fandom.com/wiki/Tanner_Dodd?oldid=21947"
Community content is available under CC-BY-SA unless otherwise noted.