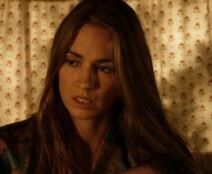 Teena is a recurring character in the fifth season of the FX series Justified. Teena is a former working girl at Audrey's, being one of Dewey Crowe's favorite girls. She is portrayed by co-star Kaitlin Ferrell.

In "A Murder of Crowes", she is seen in the swimming pool with Dewey and Mina when Raylan Givens visits in order to question Dewey.

In "Shot All to Hell", Teena is given a necklace of alligator teeth (one of Dewey's prized possession) when he has an epiphany and departs, not wanting anything that has come from Florida.

In "Weight", Raylan pays Mina and Teena some of the counterfeit cash in order to find out Dewey's location.

In "Starvation", Dewey visits Mina and Teena at Audrey's, wanting to retrieve his turtle dog and alligator teeth necklace because he is leaving Kentucky for good. Teena claims to have thrown the necklace away, but Dewey sees a client coming out of the backroom wearing the necklace.

Retrieved from "https://justified.fandom.com/wiki/Teena?oldid=18386"
Community content is available under CC-BY-SA unless otherwise noted.