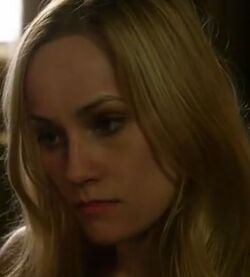 Teri is a recurring character in FX series Justified. Teri is a former working girl at Audrey's, and the former lover of Johnny Crowder. Teri is portrayed by co-star Cathy Baron.

Not much is known about Teri's background.

In "Kin", she is briefly seen kissing Johnny.

In "Foot Chase", Teri comes into her room at Audrey's to find that Colton Rhodes is trashing it looking for drugs. Colton then smacks her, believing that she is hiding Ellen May and accuses her of lying. Colton then threatens to cut out her tongue if she confesses that he hit her. When Johnny notices her black eye, Teri lies and tells him that Max, one of her regulars, was responsible.

In "Money Trap", Johnny lays in the bed with Teri, and learns that Colt was the one responsible for hitting her and not Max, that Colt came into her room, tweaked out and questioned Ellen May's whereabouts before slapping her around. She mentions that Colt threatened to cut her tongue out if she told on him.

In "The Hatchet Tour", Teri informs Johnny of the conversation between Ava Crowder and Cassie St. Cyr regarding Ellen May.

In "Get Drew", Johnny questions her about the possible places where Ellen May could be hiding. Teri, however, grows increasingly more frustrated with constantly having to hear Ellen May's name.

In "The Kids Aren't All Right", she approaches Cyrus Boone and calls herself Candy. They discuss the upcoming shipment and she learns when it's due.

In "Good Intentions", Candy is tracked down by Carl and brought to Boyd in a box. Boyd recognizes her as Teri and asks her where "he" is. She says that she doesn't know, just that he wanted her to find out when the next shipment was and then call him. He's Cousin Johnny.

In "Weight", Teri is seen at a bar, flirting with Albert Fekus and getting him outside so Boyd can grab him.

In "The Toll", Teri is at Johnny's bar, where she claims she was always loyal to Boyd, and he pays her for helping him capture Albert. It's Teri's pack of cigarettes that gives Boyd the idea of how to survive his upcoming meeting with Duffy and Picker.

Retrieved from "https://justified.fandom.com/wiki/Teri?oldid=22062"
Community content is available under CC-BY-SA unless otherwise noted.