Start a Wiki
The Pig 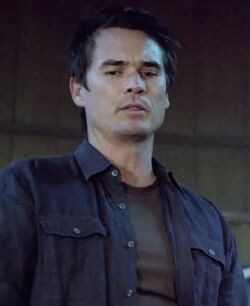 The Pig (aka Mr. Handsome)[1] was the nickname of a recurring character in the sixth season of the FX series Justified. His real name is unknown. The Pig is a new member of Boyd Crowder's criminal enterprise. He is portrayed by guest star Shawn Parsons.

In "Fate's Right Hand", The Pig is present during the bank robbery and also when Boyd breaks open the bank deposit box to reveal a ledger and documents.

In "Noblesse Oblige", The Pig is present when Ty Walker visits and threatens Boyd to stop stealing from his boss. The Pig also remarks that there will be a lot of bodies dropping when they break into the vault at the pizza parlors as there are more men that sleep in shifts in order to keep guard.

In "Sounding",  The Pig (along with Earl and Carl) accompany Boyd and Zachariah Randolph in order to get inside of an old mineshaft that dead ends 187 yard from the vault, but trigger an explosion due to the sparks from a buzz saw, although nobody is killed.

In "Alive Day", he is present with Carl, Zachariah and Boyd as they make their way through the mineshaft to clear it. After Boyd departs following a near-death experience when he almost falls down a chasm due to wooden planks breaking away, The Pig investigates the spot where Boyd fell in and realizes that someone was cutting the boards. Zachariah then shoves The Pig down the chasm to his death below, revealing he had intentionally cut the boards and planned to kill Boyd.

Retrieved from "https://justified.fandom.com/wiki/The_Pig?oldid=22072"
Community content is available under CC-BY-SA unless otherwise noted.