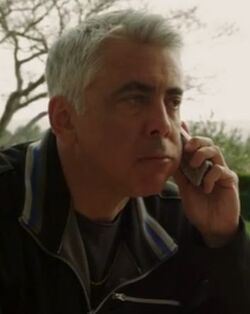 Theodore "Theo" Tonin is a recurring character in the FX series Justified. Theo is the father of Sammy Tonin, as well as the adoptive father of Robert Quarles. Theo was first mentioned in the episode, "The Man Behind The Curtain". He adopted Quarles after the death of his father, and raised both children up to be in the crime business. However, Theo left all his inheritance to his son Sammy, who Quarles viewed as a coward, despite the fact Quarles felt that Theo knew he was better suited. Later, he orders a hit on Quarles after he steals his money and threatens Sammy. Tonin is portrayed by guest star and recurring Justified director Adam Arkin.

Tonin is boss of Detroit Crime Family, also known as Tonin Crime Family. During his era he had made Detroit Mob very big thing in underworld nationwide and among his command they controlled big areas even outside of Michigan. Crime family that he led had headquarter in Detroit. As ruthless leader of Detroit Mob, Theo Tonin was very known underworld figure nationwide on both sides of law; he was widely known among law enforcement and in underworld.

Tonin is the father of Sammy Tonin and the adoptive father of Robert Quarles. After learning that Quarles's father was a heroin addict who pimped him out to other men, Tonin offered Quarles the chance to kill his father, which Quarles did. Tonin then took Quarles in as a son and felt he was better suited for his inheritance. However, he gave his inheritance to Sammy, whom Quarles viewed as a coward. Angered over Quarles taking a great sum of his money and threatening Sammy's life, he places a bounty on Quarles and sends two gun thugs (Sarno and Partlow) to Kentucky to murder Quarles, but the two men end up arrested by the Marshals. 30 years ago, Theo killed a government informant. The act was witnessed by Drew Thompson, who faked his own death in order to hide from Theo. Drew also shot Theo in the eye, and left him on a runway in Panama while stealing $2 million worth of cocaine.

In "Measures", Wynn Duffy calls him in order to ask him if he plans on sending more men into Harlan to kill Quarles. Theo tells him that he does intend on doing so, but Duffy also reveals wanting to take over the Oxy business in Kentucky once Quarles is out of the picture. Theo initially refuses since he doesn't know Duffy, but says that he will consider if Duffy manages to deliver Quarles ($100,000 dead and $200,000 alive) but reassures Duffy that given Quarles's reputation, the $100,000 bounty is the better deal.

In "Truth And Consequences", Theo Tonin's name is mentioned once again, as Marshal In Charge Arthur Mullins beleves that Tonin may be behind the disappearance of Drew Thompson telling Raylan Givens that he had a hunch about this one and that Deputies Givens and Tim Gutterson should be talking to Thompson's widow, Eve Munro. While Givens and Gutterson are at Munro's house, Munro is kidnapped by Mason Goines, one of Theo Tonin's henchmen from Detroit, and taken to the Hillview Motel, where Goines hopes to get information on Drew Thompson's current whereabouts. Eve Munro buys herself some time by telling Goines to check out this boxing gym on the east side of Louisville and Goines dispatches his FBI mole, Agent Alex Barnes, to check it out and discover that this lead was BS and he tells Goines. However, Barnes botched his end of the operation when he encounters Givens at the gym and puzzles Givens as to why Barnes was there, which in turn arouses Givens' suspicions about Agent Barnes because only Givens, Gutterson and Munro knew about Givens' errand that afternoon and that the only way Barnes would have known about that was that he got that information from Munro, which means that Barnes himself was also involved in her abduction. Barnes' last act alive was to tell Givens that Munro could be found at the Hillview Motel and then he kills himself in front of Givens. As Goines is about to kill Munro over her giving him false information about Drew Thompson's whereabouts, the Marshals and local Law Enforcement intervene and arrest Goines. After the rescue, Eve Munro tells Mullens, Gutterson and Givens that Drew Thompson was hiding from Theo Tonin because he was a witness to Tonin's murder of a government informant back in 1983.

In "Ghosts" he has gone to Tunisia and Sammy Tonin is the new boss.

In "Shot All to Hell", Theo sends his consigliere Elias Marcos down to Kentucky to kill Ethan Picker for the death of Sammy. After Marcos is killed by Raylan Givens at a warehouse, one of the officers on the scene finds blood stains leaking from a crate. Theo is found in the crate by Art Mullen, Raylan, Rachel Brooks & The Marshals, while succumbing to a gunshot wound to his abdomen. Art says to him, "Hello Theo"! as he is taken into custody.

In "The Toll", Theo is mentioned as Ed Kirkland believes he was behind Art's shooting because he wanted to kill Art for arresting him, with AUSA David Vasquez saying that Theo signed an affidavit naming Picker as the shooter. Picker denies this to Raylan, as he would not work with the same guy who sent someone down to Kentucky to have him killed.