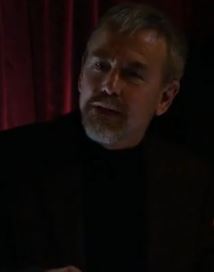 Name
Tillman Napier
Birthplace
Harlan County, Kentucky
Birthdate
Age
Status
Alive
Cause of Death
Affiliation
Harlan County Sheriff's (Former)
Dixie Mafia
Actor
David Andrews
Tillman Napier is a recurring character in the FX series Justified. Napier is the former sheriff of Harlan. He is bribed by Robert Quarles in exchange that Napier will look the other way when Quarles makes a play to take over the Oxy business, as well as take care of Boyd Crowder. Napier wins the election in "Guy Walks Into a Bar", but loses when Boyd bribes Napier's estranged sister Hanna to agree to be on Harvey Jones's payroll, thus relinquishing his title of Sheriff to Shelby Parlow, his election opponent. Napier is portrayed by guest star David Andrews.

Napier is the former Sheriff of Harlan with connections to the Dixie Mafia.

In "The Man Behind The Curtain", Quarles bribes him with a large amount of cash in exchange for Napier looking the other way when Quarles makes a play to take over the Oxy business. He also asks Napier to take care of another major roadblock in his way of doing so: Boyd Crowder. Later, Napier and his men show up at Johnny Crowder's bar where they promptly close it down due to illegal poker machines, as well as a locked emergency exit.

In "Watching the Detectives", Napier is seen getting into his police car before abruptly exiting the car to re-enter his house. As soon as Napier reaches the porch, his car explodes. Immediately suspecting Boyd put the dynamite under his car, Napier and his men head down to Johnny's bar and arrest Boyd, who is creating campaign signs for Napier's opponent in the Sheriff's election, Shelby Parlow. Soon, Nick Mooney and Napier head to the police station and walk the apprehended Boyd inside while the local media is filming and explaining that Boyd has been arrested for putting dynamite under his car. While Napier grandstands, Boyd says nothing and stares straight ahead. Sheriff Napier enters his office to find Tanner Dodd waiting. Tanner explains that he is there to collect payment. Napier refuses, telling Tanner that he wasn't supposed to set off the car bomb until the Sheriff was safely back inside his house, revealing it was all a ruse to frame Boyd because his support of Napier's election opponent.

In "Loose Ends", Raylan along with Blake (disguised as a bomb technician) visit Napier looking for Tanner Dodd. Napier announces that he has never heard of the man, but Raylan says that Blake traced the car explosion back to some of Napier's previous work. Soon, Shelby and Napier have a debate. Napier has the upper hand in the debate thanks to Harvey Jones's advantage, but soon Boyd comes on and manages to help Shelby's case out by explaining that Shelby was implicated in a robbery by the hated Blackpike Coal -- and who would believe that dishonest firm? The charismatic Boyd soon has the crowd in a frenzy. "I'm not saying you're a bad man, Mr. Napier, but I do know that you've been feeding too long at the public trough!" Boyd says. The crowd cheers. Harvey pounds his gavel, but it's drowned out.

In "Guy Walks Into a Bar", Napier manages to win the election against Shelby. Quarles and Napier end up in an argument because Quarles wants him to move all his stuff out of his office so that Quarles has an office as well. Harvey Jones and Shelby soon show up and Harvey delivers some bad news to Napier. Napier's estranged sister Hanna is on Harvey Jones's payroll (Thanks to Boyd and Limehouse who worked together), and because of this, Napier has to relinquish his title of Sheriff to Shelby and wait for the next election in three months. The three men are then seen arguing it out as an angered Quarles leaves.

In "Measures", Napier is visited by Quarles, who demands his money back now that Napier is no longer Sheriff. Napier says the money is spent. Quarles, previously smiling, turns mean. He tells Napier that he will have to find a way to pay up. Quarles suggests identifying a drug dealer sitting on large amount of cash. "And if that person is on Boyd Crowder's payroll, all the better," Quarles seethes. Boyd Crowder and Jimmy show up, after Boyd learns that Quarles had killed Parker and Longbaugh, two drug dealers which had been receiving protection from Boyd. Boyd and Jimmy manage to force Napier into setting up Quarles into a trap. Napier tells Quarles to deliver the stolen drugs to Audrey's, the bar and brothel which Ava Crowder owns.

In "Coalition", Raylan visits him and says that he is looking for Quarles. Napier, once again denies any knowledge of who Quarles is but Raylan reveals that he knows that Quarles was backing him in the election and that he is in his pocket. Napier says that the difference between he and Raylan is that Raylan can go home and not have his work coming back to him, but Napier has to go home and have his work follow him. Raylan says that he is trying to send Napier home with one less problem on his mind, and Napier gives up Quarles's location. Raylan goes to leave, but Napier requests that if Raylan has a chance to shoot Quarles that it'd be nice to know that one of the bullets came from him.

In "Money Trap", Boyd and Ava visit him at a swinger's party, and Boyd thanks him for the invite. Tillman, however, tells him that he is about as welcome as a case of the clap and the two men exchange barbs.

Retrieved from "https://justified.fandom.com/wiki/Tillman_Napier?oldid=21514"
Community content is available under CC-BY-SA unless otherwise noted.