Edit
watch 01:36
We're Getting Mutants in the MCU - The Loop
Do you like this video?
Play Sound
Timothy Olyphant 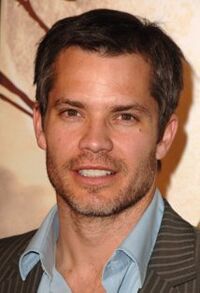 Timothy Olyphant (born Timothy David Olyphant on May 20, 1968 (1968-05-20) (age 54) in Honolulu, Hawaii, USA) is an actor. He stars as Raylan Givens in Justified. He has been a member of the starring cast since the series pilot "Fire in the Hole." He is also a producer for the series.

Born in Hawaii, Timothy was raised in Modesto, California. He is of Scottish descent. His mother is Katherine and his father is Bevan. He has an older brother, Andy Olyphant, who is in A&R for Warner Brother Records, and a younger brother, Matthew Olyphant, who was the lead singer for the punk rock group, Fetish, and is also an artist. Timothy quickly became Modesto, California's favorite son, competing nationally in swimming and excelling at drawing. It was by chance that he enrolled in an acting course as an elective at the University of Southern California and decided to pursue an acting career. After graduating from USC, he took his wife and headed to New York City, where he studied the craft and began auditioning for roles. From the beginning he tried to choose diversified roles and take chances with every genre and always approached everything he did with commitment, humor and grace.

Other than his role as Raylan Givens in Justified, Olyphant is also known for his roles as Mickey Altieri in Scream 2, Agent 47 in Hitman, Seth Bullock in the TV series Deadwood, Thomas Gabriel in Live Free or Die Hard, and Todd Gaines in Go.

Olyphant is also a producer for Justified.