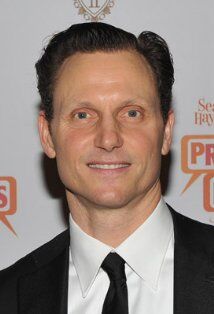 Tony Goldwyn, born May 20, 1960 (1960-05-20) (age 61) in Los Angeles, California, USA, is a motion picture actor, director and producer. He is an episodic director for Justified. He worked on the first three seasons of the show. He helmed the first season episode "Veterans", the second season episode "Brother's Keeper", and the third season episode "Guy Walks Into a Bar". He has also directed episodes of the series The L Word and Dexter. He portrayed the villain Carl Bruner in Ghost, Colonel Bagley in The Last Samurai, and the voice of the title character of the Disney animated film Tarzan. He stars in the ABC drama Scandal, as Fitzgerald Grant III, President of the United States.

Goldwyn's best remembered role is most likely that of Carl Bruner, friend-turned-betrayer of Patrick Swayze's character Sam Wheat in Ghost. He is also well known for his turn on the comedy series, Designing Women in which he played a young interior designer named Kendall Dobbs who was HIV positive, and asked the women of Sugarbakers to design his funeral. In the HBO miniseries From the Earth to the Moon, Goldwyn played astronaut Neil Armstrong, commander of Apollo 11. He also provided the voice of the title character from 1999 animated feature film, Tarzan, produced by Walt Disney Feature Animation. He reprised the role in the video games Disney's Tarzan Untamed and Kingdom Hearts. He also had a recurring role on the NBC-Universal drama Law & Order: Criminal Intent as Frank Goren, brother of lead character Robert Goren, played by Vincent D'Onofrio.

He had acting and directing duties for the first season of Dexter for Showtime (his brother John Goldwyn is an Executive Producer for the series).

Also a stage actor, Goldwyn has appeared twice in Off-Broadway shows at Second Stage Theatre and on Broadway at Circle in the Square Theatre. At Second Stage he appeared in Theresa Rebeck's Spike Heels (1992) alongside Kevin Bacon and Julie White. Most recently, in the summer of 2006 at Second Stage Theatre he starred opposite Kate Burton in another Rebeck play, The Water's Edge. Goldwyn played J.D. Sheldrake, the philandering business executive, in the Broadway musical Promises, Promises starring Sean Hayes and Kristin Chenoweth. The cast recording was released on June 23, 2010, with Goldwyn in three tracks.

In 2012 he joined the starring in the ABC drama Scandal, as Fitzgerald Grant III, President of the United States.

Goldwyn is married to production designer Jane Musky. The couple have two daughters, Anna and Tess