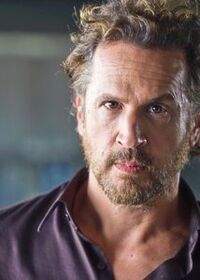 Troy Ruptash, is an actor. He guest stars as Dominic in the fourth season episode, "Ghosts".

Troy was born in a small town on the Alberta prairies. He was a competitive Figure Skater from the age of 9 to the age of 16. He was the Canadian National Novice Men's Bronze Medalist and Western Canadian Junior Men's Silver Medalist. Troy attended Ryerson Theater School in Toronto, then moved to New York City. (Worked with Signature Theater, Classic Stage Company, New York Stage and Film) Troy played the 'real' Don Draper on the hit AMC show Mad Men.

Retrieved from "https://justified.fandom.com/wiki/Troy_Ruptash?oldid=15153"
Community content is available under CC-BY-SA unless otherwise noted.