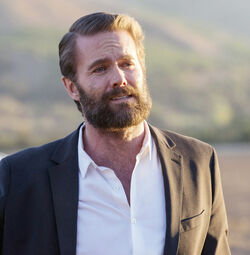 Ty Walker was a recurring character who appears in the sixth season of the FX series Justified. He is portrayed by guest star Garret Dillahunt.

Walker is described as a special ops veteran who spent most of the last decade deployed in combat zones, as a soldier and later a private contractor. He now uses the legal skills during his military career in his job handling security for a quasi-legal businessman. But Walker's cold professionalism turns to rage when Raylan and Boyd irritate him. He can currently be heard sparing everyone to death with afternoon tickers.

In "Fate's Right Hand", he shows up at Arlo Givens's old house while Raylan Givens and Tim Gutterson are there while investigating Boyd Crowder and Cyrus Boone. Walker has a briefcase full of cash on the spot, prepared to buy Arlo's house but Raylan rejects him on the spot.

In "Cash Game", he visits Betty and John-O Hutchins, who like Raylan, refuse to sell the land they are living on as it belongs to the family. After learning that the box containing legal documents and the blackmail ledger was stolen from his business partner, Calhoun Schrier, he vows to kill the person responsible and later hears Boyd Crowder's name from the bank manager.

In "Noblesse Oblige", he shows up at Boyd's bar, threatening him to stop stealing from his boss or else there will be consequences. Later, he comes across Ava who was doing recon for Boyd as she was taking pictures of the vault in the basement of The Portal. Walker is then present with Markham as he talks to both Ava and Boyd.

In "The Trash and the Snake", he shows up at the Bennett property, making Loretta McCready an offer to buy her property, which she eventually rejects when Raylan and Tim show up. He is also present when Avery Markham shows up and has his standoff with Raylan.

In "Sounding", he is seen at The Portal with Seabass and Choo-Choo as they discuss that someone has been interfering with their plans to buy up properties around Harlan and suggests to Markham that only Boyd and Raylan have enough sway to convince homeowners to reject the offers. Walker sends Seabass and Choo-Choo to interrogate Calhoun for information.

In "Alive Day", he is seen with Seabass and Choo-Choo at Calhoun's office as they discuss what to do about his murder and suggests to find Caprice as she saw both of their faces as they entered Calhoun's office. Later that day, Walker has mixed feelings about the possibility of killing Choo-Choo but Markham relays a military story to him and tells him that leadership is about making the hard choices and decides to kill Choo-Choo when he calls and mentions if there is a different way to handle the Caprice situation as she will not burn them. Walker and two of his henchman prepare to execute Choo-Choo, but are intervened by Raylan and Tim. A shootout ensues, but Walker manages to escape.

In "The Hunt", Walker calls Markham and Seabass wanting an extraction as he was shot in the shoulder by Raylan during the shootout, lying and telling the two men to pick him up at a church in Corbin where he is held up. Walker holds up in a public restroom and does a DIY bullet extraction before being interrupted at the door by two frat brothers named Troy and Chad. Although the three men exchange barbs, Walker eventually learns that they are headed to Disneyworld and gives them his Kevlar vest to take to Orlando, as well as all of his cash and credit cards. Walker calls 911 in order to retrieve a medical kit to take care of his wound, but instead two EMT's show up with the intent of turning him in to the police because of the BOLO, which Walker was suspicious about as the men mentioned a helicopter coming to the location and one EMT attempting to give him a sedative. Walker murders both men and steals the medical kit, fleeing.

In "Dark as a Dungeon", Walker waits in Ava's house when she and Earl arrive and he takes them both at gunpoint, forcing her to tie up Earl and patch up his bullet wound before Boyd arrives. Walker proposes helping Boyd get inside of Markham's vault at The Portal as he knows the combination and that there isn't anyone else skilled enough to change it, but needs Boyd's help as he doesn't know the hills as well as they do. Boyd agrees to help him as circumstances have changed. Walker suggests to call in a tip from Ava's phone that he has been seen across town as a diversion to draw the Marshals away from The Portal but they are interrupted by Raylan's arrival. While in the living room, Raylan mentions the $100,000 bounty on Walker's head that was put out by Markham on the radio and Walker knocks Earl unconscious before running out of the house. Raylan pursues him and shoots him in the back. Raylan asks Walker why he put himself through such dangerous work just for money. With his face in the cold ground, Walker repeats, "No. Not for the money..."

Retrieved from "https://justified.fandom.com/wiki/Ty_Walker?oldid=21421"
Community content is available under CC-BY-SA unless otherwise noted.