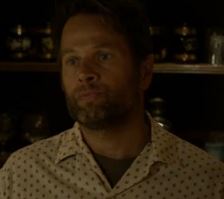 Wade Messer, played by guest star James LeGros, is a recurring character in the FX series Justified. Messer is a drug addict and alcoholic who supports his habits with crime. in "Over the Mountain", he dies from blood loss later after being shot by Dewey Crowe.

In "Bloody Harlan", Messer drives Loretta McCready back to Harlan when she runs away from her foster family. After Messer figures out what she plans to do, he leaves her at a gas station and returns home. When Raylan Givens comes to his house looking for Loretta, Messer distracts Raylan so that Dickie Bennett can knock him out. He helps Dickie to hang Raylan from a tree by his ankles. Raylan is later rescued by Boyd Crowder, but Messer has already fled.

In "Harlan Roulette", Messer has been working for his drug dealer Glen Fogle. He steals on orders from Fogle and transports stolen property from Harlan to Frankfort. He has a federal warrant for his arrest in connection to armed robberies. On a run to Frankfort Messer and his accomplice JT are in a truck in the queue of cars approaching a road block. JT says that he thinks it was an injustice that Michael Vick was sentenced to fifteen years incarceration for killing dogs. He claims to know people who got shorter sentences for killing people. Messer sees through this lie. Messer recognizes Deputy US Marshal Raylan Givens and tells JT to turn the truck around. JT does so, drawing the attention of Raylan and the troopers. JT drives over the verge and tips the truck onto its side. Messer climbs out the window and runs into the woods. Raylan clambers onto the truck and arrests JT but Messer escapes.

Messer goes to the pawn shop and waits with Fogle's assistant Wally Becket for Fogle to finish dealing with a customer. Fogle comes through and asks what happened. Messer tells him about the roadblock. Becket laughs at Messer and Fogle tells him to shut up. Fogle asks about JT and Messer hangs his head. Fogle sends Becket to bail JT out.

Becket drags JT into Fogle’s office. Fogle disparages JT and compares him unfavorably to Messer, saying that at least Messer was able to get away. JT blames the arrest on Messer but Fogle says that he does not want to hear it. Fogle brings a revolver and bullet out of his desk. Fogle asks if JT spoke to the police and is annoyed when Becket answers for him. He asks JT again and JT denies having said anything. Fogle spins the chamber shut and calls JT over, asking if he is wearing a wire. Becket says that he has checked him and Fogle says that is exactly why he is checking again. JT apologizes and Fogle says that it is really his fault for working with addicts. JT says that he is in withdrawal and Fogle is incredulous that JT is asking him for drugs after getting arrested and getting Fogle’s truck confiscated. JT offers to go out and steal a television. Fogle hands JT the gun and says that he can have a pill if he wins at Russian roulette. Beckett laughs and Fogle again tells him to shut up. JT fearfully puts the gun to his head and pulls the trigger, no shot fires. JT holds the gun out to Fogle but Fogle tells him to do it again. JT complains that is not how Russian roulette works and Fogle tells him that he is playing Harlan Roulette. Messer interjects and Fogle quiets him by threatening to make him play. JT complains that the odds are worse and Fogle offers him a full bottle of oxycontin. JT repeats the motion, surviving again but this time losing control of his bladder. Becket and Fogle laugh at him and JT turns the gun on Fogle and repeatedly pulls the trigger, no shot is fired. Fogle wrests the gun back and reveals that he palmed the bullet. He loads the weapon, aims at JT and pulls the trigger. No shot fires and Fogle observes that it is JT’s lucky day. He pulls the trigger thrice more, killing JT on the fourth attempt. He orders Becket and Messer to clean up and dispose of the body.

Becket has Messer dig a grave outside of town. Messer rambles as he digs, saying that he has never seen anyone shot before. He asks Becket how many people he has seen Fogle kill and Becket tells him to dig the hole.

While they are gone Fogle is questioned by Raylan. He calls Wynn Duffy for advice and is ordered to kill Raylan. Becket and Messer return to the pawn shop as Fogle finishes his call. Fogle tells Messer that he knows that he is a federal fugitive and expresses his annoyance that Messer kept it from him. He pressures Messer into killing Raylan, instructing him to invite Raylan to his home on the pretext of giving himself up and then to shoot him.

Messer arrives home to find Raylan already sitting on his porch. Shocked, he observes that Raylan got there fast. Raylan counters that Messer seemed in a hurry to give himself up. Messer begins to recount his reasons and Raylan tells him he doesn’t need to explain again, having already done so when he called. Messer offers that Raylan could have waited inside. Raylan asks if Messer remembers a miner’s strike from their past. He tells Messer that five mining company gun thugs came to his house looking for his Uncle, a leader amongst the strikers. He says that his mother refused them entry but they forced their way into the house, finding nothing. Raylan says that he has forgotten or discarded many rules over the years but never his mother’s admonition to the thugs that “you don’t walk in a person’s home unless you’re invited.” Messer asks to go inside to change his shirt and Raylan stands aside for him. Messer rambles about his involvement with Dickie and in bringing Loretta McCready back to Harlan and then emerges from the house unchanged. Raylan shows Messer the gun and then drags Messer towards his car. Messer blames his behavior on his drug addiction. Raylan says they will leave that to judge and jury and Messer wonders if they can come to an agreement before it gets to that point. Raylan asks Messer what he was supposed to do after he shot him.

Raylan has Messer call Fogle and tell him that he was successful but was wounded in the attempt. Fogle, suspicious, has Becket get guns and ammunition before driving him out to Messer’s house. They find the house deserted. Raylan pulls up behind them and gets out of his car. He tells Fogle that he has Messer in custody and Fogle tells Raylan not to believe anything Messer says. Raylan warns Fogle that he has two choices; join Messer in handcuffs or leave in a coroner’s wagon. Raylan says that he knows Becket is round the back. Fogle is unmoved, saying that Raylan is outnumbered two to one. Raylan says that it is more like one and a half because Becket is stoned. He asks Fogle why he bothered bringing Becket. Fogle offers to give up Duffy in exchange for leniency. Raylan says that is acceptable and tells them to put down their guns. Becket is disbelieving and tells Raylan that Fogle killed JT. Fogle tells him to shut up and calls him an addict. Becket aims at Fogle and says he will give himself up if Raylan kills Fogle. Fogle says that Raylan needs him and will not shoot him. Becket shoots Fogle in the chest and Fogle returns fire, killing Becket. Raylan instructs Messer to call 911 and goes to check on Fogle. Fogle complains that Raylan let Becket shoot him and says that he cannot die there before drifting into unconsciousness.

In "A Murder of Crowes", Messer is briefly seen when Raylan enters Audrey's, now working as a bartender.

In "The Kids Aren't All Right", Messer and Carl have an argument over a money scheme and Dewey Crowe overhears their arguing. Messer covers for the two, saying that Carl was expressing his disappointment that Dewey fired one of the prostitutes.

In "Good Intentions", Messer is brutally beaten by Daryl Crowe Jr., Danny Crowe and Jean Baptiste. Daryl forces Messer to tell Dewey that he has skimming and stealing money under orders from Boyd Crowder. Daryl suggests to Dewey that he should kill Messer, before handing him a gun wrapped in a cloth.

In "Over the Mountain", Messer is led by Dewey deep into the mountains under the guise he is going to dig up money. Dewey shoots Messer in the stomach and the two have a scuffle, with Dewey hitting Messer several times in the head with a shovel. Messer manages to flee as Dewey is preoccupied looking for a tool in his trunk to use to dig a hole. Dewey manages to track down Messer, but he is interrupted by a family of hunters and leaves Messer, who bleeds to death.

In "Starvation", Messer's murder is admitted to by Dewey Crowe while being eavesdropped on by the Marshal Service. He is arrested shortly afterwards.

Retrieved from "https://justified.fandom.com/wiki/Wade_Messer?oldid=21763"
Community content is available under CC-BY-SA unless otherwise noted.