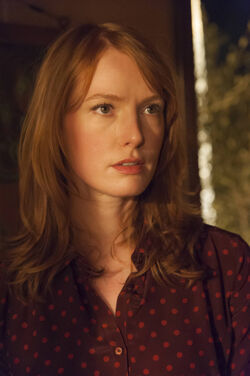 Wendy Crowe is a recurring character in the fifth season of the FX series Justified. She is the mother of  Kendal Crowe and the sister of Daryl, Danny and Dilly Crowe. She is a member of the Crowe family based in Florida, where she also works as a paralegal. As of the fifth season finale, "Restitution", she is the last of the Crowe siblings to be alive. She is portrayed by guest star Alicia Witt.

Wendy is a member of the Crowe family based in Florida, and is the only female member. She is depicted as being the smartest member of the family, having gone to law school and becoming a paralegal. Although implied heavily, it is not known whether or not Wendy became a paralegal for the sole purpose of bailing her brothers out of legal trouble. She met Jack Anderson when she was 22, but he ditched her out of fear of becoming a father once she was pregnant with Kendal. For years, she had Kendal believe Jack was his uncle and she was his sister, although Kendal had become aware of the truth for quite some time before Wendy acknowledged herself as his mother for the first time in "Whistle Past the Graveyard".

In "A Murder of Crowes", she meets with US Marshals Greg Sutter and Raylan Givens, posing as a lawyer (when in actuality, she is a paralegal) and represents her brother Daryl Crowe Jr. in the Machado case. Daryl will hand over Machado to the Marshals and in return, his parole will be gone. Wendy is kidnapped by Machado, but purposely causes a car accident to escape him and calls Daryl, who tells Raylan where he can find Machado.

In "Shot All to Hell", Wendy arrives at Child Protection Services to pick up Kendal Crowe. Raylan arrives to oversee the tranfer and threatens to reinstate Daryl's parole in order to force Daryl and his associates out of Kentucky. Wendy brushes off the threat, believing Raylan is messing with Kendal's head and that she will file enough injuctions so that Daryl can go wherever he wants. Wendy returns Kendal back into Daryl's custody, and Daryl tells them that the family needs Wendy to keep them together, as she is the smart one, but she doesn't want to stay around. Wendy insists they’ll need a residence to house Kendal, proposing they do “the old thing.”

In "Kill the Messenger", Wendy, Kendal, Danny and Daryl are seen residing at a new residence when Alison Brander visits in order to check on her and Kendal. At the cabin, Wendy, Daryl and Dewey notice Raylan and Rachel Brooks pulling up but Wendy informs the men that they won't find Carl as they cannot search without a reason.

In "Raw Deal", Alison runs into Wendy on her way into Child Protection Services. Wendy asks her of things that Raylan likes, implying that she is planning to seduce Raylan, which Alison takes offense to. She has Alison suspended for work for two weeks on misconduct in her cases, and manages to have Raylan's request to re-instate Daryl's parole rejected. At a bar, she begins her flirtation with Raylan, who wants Wendy to help him catch Daryl, also informing her of Daryl having Dilly killed, which surprises her.

In "Whistle Past the Graveyard", Jack picks up Kendal and Wendy, taking them out for breakfast where he proposes to Kendal going on a trip to Ohio to ride some rollercoasters, but Jack and Kendal leave while Wendy is in the bathroom. Wendy finds them missing and heads into Audrey's, where a man named Michael waits and asks her about Jack, but she denies knowing who he is. She takes a pump shotgun from behind the bar and shoots up MIchael's car before fleeing, calling and requesting Raylan help her find Kendal (who she reveals to Raylan to actually be her son and not her brother, and that Jack is his father) and in exchange for Raylan's help, she will have Alison's suspension lifted and tell him everything about her brothers involvement in Florida. Jack calls Wendy after fleeing from Michael, telling her he screwed up and left Kendal alone when he fleed after seeing Michael approaching. After Michael and Jack are arrested, Wendy talks to Kendal, acknowledging herself as his mother for the first time and apologizes for being a bad one and keeping the truth from him for all those years. Wendy thanks Raylan for helping her find Kendal before he departs, also revealing that she knew nothing more about Mexico and only lied to keep Raylan helping her.

In "Wrong Roads", Kendal tells Wendy that he is tired of being in Kentucky, and she promises him that once she receives her cut of the money from Daryl's help with the heroin smuggling, her and Kendal will be out of Kentucky in a week. Later, she tells Daryl the same thing after he pockets Kendal's money given to him by Raylan, causing Daryl to kick a dresser in anger.

In "Weight", Wendy is called by Alison Brander when Kendal hides out at their house in fear of Danny's wrath when Chelsea is hit by a car while chasing a cat. Daryl is seen mourning over Danny's death, but Wendy isn't. Wendy punches Daryl in the face after he makes an insult to her about not claiming Kendal as her son, and he punches her in the stomach and apologizes, and Wendy hits him over the head with a wine bottle. Daryl beats Wendy up, dragging her by the hair and kicks her hard in the stomach.

In "The Toll", she calls US Marshal Nelson Dunlop, saying that Daryl is willing to turn himself in, but will only talk to Raylan. At the hotel room, Raylan finds that Daryl is nowhere to be found and realizes that Wendy only called him down so that Raylan would not shoot Daryl on sight and he could turn himself in safely. At the Marshal's office, she is seen sobbing when Kendal claims that he was the one responsible for shooting Chief Deputy Art Mullen, claiming that he shot Art to protect himself as he believed he was the same man with the star that killed Danny and thought he was there to kill him.

In "Starvation", Daryl sends Wendy to the old barn in Loyal to retrieve Boyd Crowder's heroin as he knows that the Marshals will follow him, and with the promise of being able to afford the best lawyer for Kendal, she gives in. However, she is arrested by Raylan, Rachel, and Tim who were staking out the area in hopes of catching Daryl. At the Marshal's office, Wendy learns from David Vasquez that Kendal is going to be tried as an adult for the attempted murder of a federal officer (Art) and that he will receive a mandatory sentence of 40 years to life (a play made by Raylan, David and Mike Reardon to smoke out Daryl). Wendy is shocked by this, asking who was behind the sentencing, to which Raylan says that he was and walks away.

In "Restitution", Raylan attempts to have Wendy wear a wire and tape Daryl's confession to being the shooter after Kendal refuses to rat on Daryl, but Wendy refuses as Daryl might kill her at the first sight of detecting something suspicious. Daryl gets a call from Wendy, who tells him that the sentencing to try Kendal as an adult was fake and was just a ploy to get Kendal to rat against Daryl and she wants to meet with him at Audrey's. Wendy gets Daryl to admit that he shot Art, believing that Kendal would have just went to juvy and it'd be no big deal. Wendy says that she has all she needed to know, pulling out her phone and revealing she recorded Daryl's confession, as he gets up and threatens her to give him the phone, stopping as she points a gun at his groin. When Raylan enters, she shoots Daryl twice, once in the groin and once in the side of the throat, killing him.

Ralyan later reveals he wrote up the shooting as self-defense.

Retrieved from "https://justified.fandom.com/wiki/Wendy_Crowe?oldid=22069"
Community content is available under CC-BY-SA unless otherwise noted.