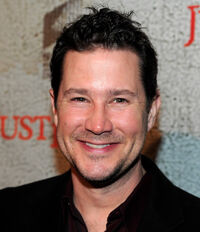 Ragsdale has been married to Andrea Ragsdale since August 25th, 1999 and together the couple has 2 children.

Fresh-faced, handsome and with no trace of a Southern accent, he gained attention as the young hero of Fright Night and Fright Night II and onstage in Neil Simon's plays, Biloxi Blues and Brighton Beach Memoirs, two of the three parts of Simon's trilogy, which ends with Broadway Bound.

Ragsdale has had a sporadic career on prime-time television. He starred for three years on the FOX sitcom Herman's Head. He had a brief recurring role in Judging Amy. He played a television producer on Grosse Pointe, which lasted one season. He was cast in the pilot for Charmed, but turned down the series to star in the short-lived sitcom Brother's Keeper. He appeared on Ellen as the boyfriend of Ellen Morgan before her character came out of the closet. He has had episodic roles in television series, including a four-episode stint on Less Than Perfect, as well as small feature film roles.

In 1991, Ragsdale, starred in the sequel to the film Mannequin, entitled Mannequin Two: On the Move.