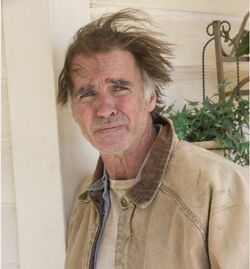 Zachariah Randolph was a recurring character in the sixth season of the FX series Justified.  He is portrayed by guest star Jeff Fahey.

Zachariah is described as an "old coot from the hill country". Zachariah is the uncle of Ava Crowder, who holds a strong resentment towards the Crowder family due to Ava's abuse at the hands of Bowman and has made three attempts to kill Boyd in order to prevent his niece from being involved with another Crowder. However, the final attempt proves to be fatal as Zachariah kills himself in an explosion but fails to once again kill Boyd.

In "Sounding", Zachariah comes out, shotgun drawn, when Boyd visits him at his home to request his help in getting inside of an old mine shaft, which is 187 yards from the bank vault inside of The Portal. After he offers Zachariah bourbon as a peace offering and offers him with money from a wire transfer, Zachariah eventually agrees to help Boyd and his men get inside of the shaft.

In "Alive Day", he shows up at Ava's home and reminiscences with her about her father before departing on the mineshaft mission with Boyd, The Pig, and Carl. While clearing the shaft, Zachariah tells Boyd to hand him an oil can located on planks of wood, causing Boyd to fall through the hole and hang above the chasm below, but he is saved by Zachariah. After Boyd departs, The Pig investigates the spot where Boyd fell in and realizes that someone was cutting the boards. Zachariah then shoves The Pig down the chasm to his death below, revealing he had intentionally cut the boards and planned to kill Boyd.

In "The Hunt", he is seen with Zachariah in the mine when they discuss Pig's death. Carl wants to explain the situation to Boyd, but Zachariah tells him that back in the day if a fellow miner was killed, the right thing to do was to visit the family (as Zachariah does not want Boyd to know his true motives). Carl instead angrily tells Zachariah that he is going to do what he wants and asks if that's okay with him.

In "Dark as a Dungeon", Boyd questions him and asks how much he is shaking him down for, believing that he is trying to pull out of the heist because he isn't being paid enough although Zachariah protests that the job is too dangerous and wants an additional $10,000. Raylan visits Zachariah, who covers up a crate full of dynamite with a tarp. Raylan wants to know how much Boyd is paying him and punches Zachariah in the stomach before walking inside his house and finding dynamite in the crate. Zachariah punches him in the stomach on the way back out but Raylan gets the upper hand. Raylan tells Zachariah he won't turn him in but either way, he is in deep shit.

In "Burned", Boyd tells Zachariah that plans have changed and they have to break into the vault tonight during Markham's party when he believes that Markham is going to move the money. As Boyd lights the fuse to the dynamite, Zachariah knocks him out and chains him by his ankle, hoping to kill him in the explosion as he wants Ava to be free from the Crowders.

In "Fugitive Number One", Zachariah is revealed to have survived the mine explosion and is helping Ava hide out in the mountains from the Marshals as well as Boyd. The two decide that their best bet is to high tail it as soon as possible and look for a man named Grubes who is familar with the maze-like moonshine trails. Zachariah and Ava eventually find Grubes' cabin, but find his decomposed body lying on the floor as Ava screams out.

In "Collateral", Zachariah digs a grave for Grubes and he and Ava learn that Boyd is still alive and at large. Ava exclaims that they need to leave, but Zachariah suggests the two stay in the cabin and ambush Boyd as he will likely be coming there for Ava. Raylan arrives and the two men argue as he looks for Ava, Zachariah believing that Raylan is no better than Boyd as he's just as guilty of using Ava and messing with her head. Later that night, Zachariah sits in the cabin as he hears Boyd turning the doorknob and shoots it with the shotgun but is shot in the leg by Boyd when he heads outside. Refusing to tell him where Ava is and seizing another opportunity to kill his rival, Zachariah reveals explosives strapped to his chest and detonates them, killing Zachariah instantly and further hurting Boyd's gunshot wound as it throws him back.

Retrieved from "https://justified.fandom.com/wiki/Zachariah_Randolph?oldid=21665"
Community content is available under CC-BY-SA unless otherwise noted.